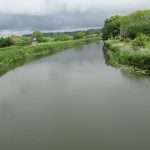 There is a fishing tackle shop in Mountrath: a real fishing tackle shop with rods and reels, and lines and floats, and all the other things for which a fisherman could wish. Whilst passing it almost every day, I have never had the courage to go in, I wouldn’t know what to say if I did, but peering through the window at the multicoloured display, there is a flood of happy memories.

It is more than forty years since I last sat on a river bank, the long distant summer of 1975.

Going fishing was one of the things the restrictive fundamentalist Christian regime of our school allowed, and one Saturday in June three of us passed on the opportunity to go on the schoolbus to the seaside town of Paignton, and instead walked to a river that ran through a nearby Dartmoor valley. The river was was known for its trout and it was an opportunity to use the fishing rod that had been a present the previous Christmas and which had received little use. There was no requirement to fly fish the river, which was a good thing because none of us had the equipment needed for such sport fishing, nor could we have afforded the price of the sort of permit generally required for trout waters.

The afternoon was unsuccessful, only one fish was landed, and it was foul-hooked by a boy called Kevin. There arose a good-natured disagreement between Kevin and the other boy about the fish having been thrown back into the river. A boisterous exchange ensued in which Kevin received a push in the chest, stumbled backwards and fell over the edge of the bank and into the river. In the wintertime, the depth would have been much greater, but on a warm Saturday in June, it was no more than a couple of feet. Kevin sat on the riverbed calling every curse he knew down upon his assailant, who stood on the bank, speechless with laughter.

The fishing was abandoned as we sought to dry Kevin’s clothes. Each garment was wrung out and hung on the bushes. Kevin sat on the grass in a state of undress, muttering about not going fishing in such company again.

Kevin’s complaints were unnecessary, we did not go fishing again that term; we didn’t ever go fishing again. Back in Somerset for the summer holidays, I cycled down to a local river a couple of times, it seemed dull without the companionship of schoolmates. When the new school year began in September, fishing seemed the activity for younger people.

Sometimes, the thought of hours on a riverbank seems very attractive. Perhaps, one day, there will be the courage, to go through that shop door. 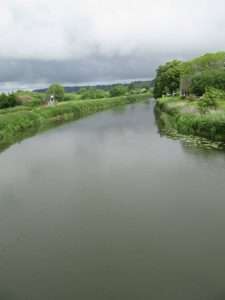