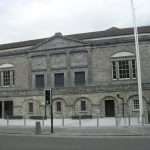 Visiting a prison is an intimidating experience, or perhaps it is only intimidating for those who have not done it before. A queue at a check-in where one’s names is checked against a list. An officer hands over a locker key so unauthorised items can be cleared from one’s pockets. The key is returned to him and he hands over a docket and a plastic token with the locker number.

“Wait until the number on the docket is called, then you can proceed.”

The visitors’ centre is full of family and friends of inmates. A nice lady gives me a cup of tea and I sit down. There seems no particular logic in which the numbers are called. Finally, number 73 is announced. I follow a knot of people, out from the visitors’ centre through the open air to the main building.

Access is through an airlock-type entrance. Only one door is open at a time and no-one is allowed through until the dockets have been passed through a security lock similar to ones at railway booking offices, or 24 hour petrol stations, to checked by an officer, who then hands them back. A corridor, and then turnstiles. on which a small boy climbs as he might a climbing frame in the park. Once through the turnstile, there is a scanning area to match that of any airport; forgetting to remove my watch means the detector is activated. The scanning is followed by drug-sniffing dog and another walk across a yard, to another door and another check of the dockets, before a burly officer unlocks a door that allows access to the corridor to the supervised visiting rooms.

Two small girls with their mother look anxiously around. One thirty minute visit a week is permitted, is this how they and their mother spend each Saturday afternoon? What effect has it on the emotional and psychological development of the children?

On the wall of the visitors’ centre, a poster has a quote from Erica Jong, “Everyone has talent. What’s rare is the courage to follow it to the dark places where it leads.” It seems an odd line for a prison wall, where it is most likely to be read in a very literal way, that is if it is read at all. It was the particular talents of some of those detained that had led them to this dark place.

Erica Jong presumably intended the words not to suggest that one’s talent for, say, breaking into cars and stealing them should be pursued with courage until one finds oneself incarcerated, but that one needs the courage to use the talents one has in a positive way, even if that means moving into the uncertain and the unknown.

It would not be a bad philosophy for the judicial system, which routinely imprisons non-violent offenders. The option of electronic tagging and productive work, work that might allow financial restitution to the victims of burglaries and theft, should surely be preferable to the present regime. It is uncertain where it might lead, but it has to be better for young children than Saturday afternoons at the prison. 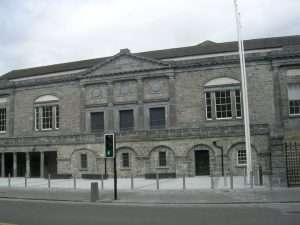