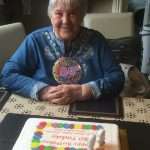 Sounding formal, “Mother” is an affectionate term, first used by my middle sister. When there was a desire to rebuke her for doing things she didn’t need to do, overworking and then feeling unwell, my sister would look at her and say in a deep, stern voice, “Mother!”

Mother is a living oral history of our family and community. A fascination with reading biographies of the great and the good has been accompanied by a fascination with the life stories of ordinary people. Hours can be spent recounting who lived on which farm and who is connected to whom, third and fourth cousins are easily recounted.

Mother has a profound sense of place; home has always been the parishes surrounding the town of Langport – Aller, Huish Episcopi, Long Sutton, High Ham. The family were small farmers and trace their lineage back at least four hundred years. The mediaeval churches, the stone buildings, the green lowlands, the cycle of rural life, the succeeding generations; these are things that are part of her makeup, things that are assumed, things that are part of an unchanging order.

Mother is gifted with a deep sense of humour, even though she would claim that she might laugh on Friday to a joke she has been told on Monday. There is a natural delight in mischief and fun, a sharing in her son’s oddball sense of humour, laughter at silly stories and absurd happenings. Farming life and small villages have provided her with an abundant supply of tales of daftness.

Mother is a gifted conversationalist, if no-one else participates, she will answer her own questions. The subjects will be eclectic, a question about Theresa May and the implications of Brexit for those of us who are British citizens in Ireland might be followed by an update on the fortunes of a grand nephew or niece. It is not so much a matter of non-sequitirs as working through a list of topics.

Mother is, of course, Mother, the person who can insist that although you might be over fifty, you should still phone her to say that you have got home safely. To fail to telephone with a full account of all family members at least once a week will be considered a sure sign that some unanticipated catastrophe might have occurred. The advent of Facebook has meant our father has been entrusted with the duty of reading, from his iPad each morning, all the updates from our family members from the previous day.

Mother is 80, but 80 is only a number. Mother is unchanged since the days of our childhood and will hardly be changing now. 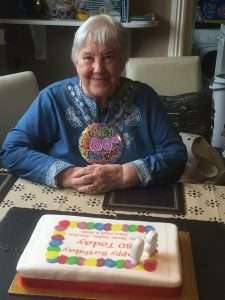