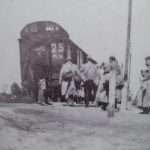 In our house, we still had a black and white portable as our only television until November 1990. I remember precisely because it was a month after our son was born that our Mitsubishi set was bought: it lasted until 2007. Admittedly, monochrome television was a bit passé by 1990 and the television licence people seemed to express increasing suspicion in their correspondence each year, the black and white licence being considerably cheaper than the colour.

In the 1970s, with the advent of the automatic photo booths, black and white photographs were the stuff of romance. Thirty or forty pence would buy you a strip of four pictures that might be shared with favoured friends. The shadowy innocent photos of one’s amour were a far remove from the digital images that are now instantly shared. Monochrome photography has not not gone away. Black and white still seems the preferred medium of many photographers; it has qualities, a capturing of nuances that polychrome pictures somehow miss. Monochrome pictures can transform scenes from being mundane to being artistic; there is not the starkness, not the cold reality conveyed by full colour.

Politically, perhaps a monochrome world was easier; black and white pictures were more effective in concealing the worst of unpleasantness, rendering harshness in shades that could conceal the full ugliness of a sometimes violent reality. Perhaps, if colour pictures had been earlier available, history might have been changed by a full realisation of the horror. 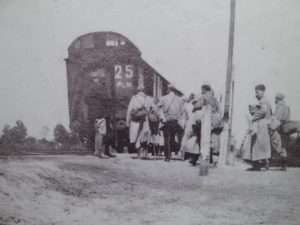