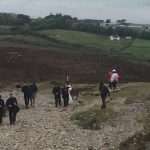 An odd thing about an English secular upbringing was the inculcation of respect for the values and beliefs of everyone, no matter how odd those beliefs might seem to those of us who took a rational and scientific perspective on life. There were fundamentalist Christians in our village, Creationists whose understanding of the beginning of time was very different from that in our house, but at no time would the thought have occurred to mock them for their faith, and our father would not have tolerated the abuse of anyone. A line from the Eighteenth Century French writer Voltaire was one of his favourites, “I despise what you say, but will defend to the death your right to say it.”

The English toleration of almost anything, fruitcakes, zealots weirdos and all, came out of the bloodiness of the Sixteenth and Seventeenth Centuries. By 1888, there was a law that allowed those who professed no religious belief to hold public positions. A pluralist tradition developed, a tradition that depended on everyone tolerating everyone else. Perhaps it is political correctness, but it allowed the development of a society where there was freedom and tolerance.

Ireland’s political tradition was shaped by a violent repression of religious traditions. English rule brought centuries of discrimination against Roman Catholicism, the establishment of the new state in 1922 allowed a Protestant hegemony to continue in Northern Irelandand the rule of the Roman Catholic bishops to emerge in the new Republic.

The rejection of oppressive theological traditions led to bitter sectarianism in the North and to anti-clericalism in the Republic. There never seemed to develop the tradition of indifference that had grown up in England, an indifference that was indifferent to everything except intolerance. The spirit of Voltaire rarely infused the discourse of those who burned effigies on Ulster bonfires and seems equally absent from those who have developed a casual contempt for the Roman Catholic traditions.

Walkers on Croagh Patrick today encountered what must have been the most macabre stag party ever. The groom was dressed as Jesus and was carrying a cross up the mountainside, accompanied by the rest of the party dressed in black.

The stag party was not blasphemous, it was not even black humour, it was an immature statement that Ireland in 2017 has not learned Voltaire’s values, these men might despise what others say, but they would never defend anyone’s right to believe anything. Indifference takes a long time to learn.