The Spotify weekly selection included John Denver’s Annie’s Song. “You fill up my senses, like a night in the forest,” sang the Rocky Mountain wonderboy. It recalled a radio phone-in during which a woman told the presenter that for years she had assumed that John Denver was singing about a “knight” in the forest. They had both laughed loudly at the story, which conjured a picture of a man in a full suit of armer carrying a shield and lance and mounted on a great white charger, itself protected by armour and chain mail. Knights in armour were a rare occurrence in Europe and were becoming the stuff of legend by the time Europeans reached the great redwood forests.

Despite the incongruity of the image, it is one that has remained. John Denver cannot sing of the sensory experience of being among trees in the darkness, the sights, the sounds, the feelings, the scents, without the great medieval knight coming galloping into the middle of the picture (sorry if that spoils the future enjoyment of Annie’s Song for anyone). Incongruity has an odd power to capture the imagination, perhaps a greater power than logic.

Preparing to visit the Western Front next week, the images that are most haunting are those that incongruous with popular perception. The sixty-seven year old Lieutenant Henry Webber, who died at the Somme, and the fourteen year old Valentine Strudwick, who died at Ypres, contrast sharply with the traditional picture of the twenty-something Private Tommy Atkins, with a young wife or sweetheart back home in Blighty. The French zouave troops from Algeria, in their white pantaloons, and the Scots Highland battalions in their kilts, differ from the ideas of khaki uniforms of tunic and trousers, puttees and boots.

The incongruous is memorable, the eccentric, the different, the odd. Those remembered by most from school and college days are not those who excelled academically, or on the sporting field, but those who were “characters:”; the man who would ride a motor cycle up and down the top floor corridor; the man who drove from Cork to Nenagh with a calf beside him in the front of a Mini; the man who replaced the back seat of his Zastava car with a plank of wood because he believed he would achieve more miles per gallon.

A knight in a forest is probably not incongruous when compared with much that is memorable. Perhaps there is reassurance in the thought that being remembered does not demand brilliance or strength, but simply that one is different. 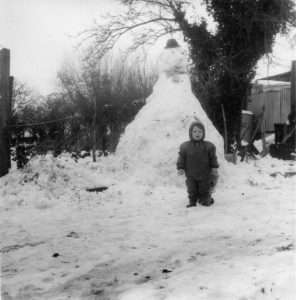