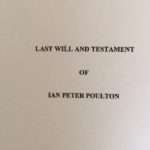 A large buff envelope lay at the bottom of a drawer filled with life insurance and pension correspondence. With neither print nor writing on the outside, there was no clue as to what it might contain.Pulling out two A4 sheets of paper, paper that was of good quality, the contents were immediately clear, “The Last Will and Testament of Ian Peter Poulton.” It was not hard to remember it being drafted.

September 2001 and a trip to the Philippines prompted the unlikely step of going to a solicitor before departing. The Twin Towers attacks had just taken place and there was a widespread sense of apprehension as to when and where there might be another deadly strike. The Philippine visit would include time on the southern island of Mindanao, in an area where the extremist group Abu Sayyaf were active. Linked to al Qaeda and to those behind the September 11th attacks, the group was known for its murderous ruthlessness.

There was almost a sense of bravado in going to the solicitor’s office. With a plethora from which to choose, he had been selected for no reason other than his house, “Somerton,” bore the name of a town close to our village at home. He was a proper solicitor, an avuncular figure in a tweed suit sat at a leather-topped desk.

The will was simple, the entire estate would be left to my spouse, passing to our children in the event of her death. “No particular legacies?” asked the nice gentleman. “No charitable bequests?” Having no intention of being dead, adding details to the will seemed a superfluous exercise.

A couple of days later, watching a Bray Wanderers football match, there came an opportunity to advise the person appointed to execute the will. “By the way, in the event of anything going wrong, you’re executor.”

There was a moment’s silence. “Alright, but only until you find someone more responsible.”

The will seemed adequate for the Philippines trip in 2001; and for Rwanda and Burundi in 2009; and Rwanda in 2010; and Rwanda and Burundi in 2011 and in 2012; and for Rwanda in 2015. The logic was odd; there was almost certainly more chance of dying in Ireland in some dull and routine way than in some exotic death on foreign soil, but death never seems routine.

Looking at its plain, matter of fact print, it was hard to imagine that something so mundane might shape one’s posterity. It should be updated, revised, accommodated to the facts. Perhaps there are still avuncular solicitors. 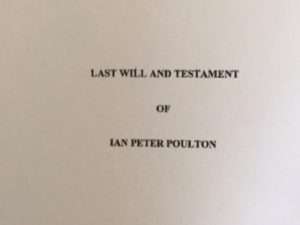