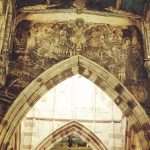 A liking for detective stories brought a familiarity with the Matthew Shardlake stories of CJ Sansom. Shardlake is a barrister in mid-Sixteenth Century England, the mysteries he investigates are set against the background of the seedy and harsh realities of the lives of ordinary people and against the aristocratic and clerical struggles for power in Crown and Church. Sansom also describes the hideous reality of what it meant for those who dared to differ with Church doctrine. His description of the killing of Anne Askew is historically accurate, Bishop Shaxton really did preach a sermon on the Mass to those about to be burned to death and Anne Askew really did take an hour to die. Sansom’s words are a most horrible statement of fact set in the midst of a fictional tale:

Shaxton began to preach, a long disquisition justifying the ancient doctrine of the Mass. The three condemned men listened in silence, one trembling uncontrollably. Sweat formed on their faces and on their white shifts. Anne Askew, though, periodically interrupted Shaxton with cries of, ‘He misses the point, and speaks without the Book!’ Her face looked cheerful and composed now, almost as though she were enjoying the spectacle. I wondered if the poor woman was mad. Someone in the crowd called out, ‘Get on with it! Light the fire!’

At length Shaxton finished. He slowly descended and was led back to the gatehouse. He started to go in but the soldiers seized his arms, forcing him to turn and stand in the doorway. He was to be made to watch.

More kindling was laid round the prisoners; it reached now to their thighs. Then the constable with the torch came over and, one by one, lit the faggots. There was a crackling, then a gasping that soon turned to screaming as the flames licked the victims’ legs. One of the men yelled out, ‘Christ receive me! Christ receive me!’ over and over again. I heard a moaning wail from Anne Askew and closed my eyes. All around the crowd was silent, watching.

The screaming, and the crackling of the faggots, seemed to go on forever. . . . The flames were rising fast, light and transparent in the bright July day. The three men were still yelling and writhing; the flames had reached their arms and lower bodies and burned the skin away; blood trickled down into the inferno. Two of the men were leaning forward in a frantic attempt to ignite the gunpowder, but the flames were not yet high enough. Anne Askew sat slumped in her chair; she seemed to have lost consciousness. I felt sick. . . .

. . . I saw that some of the crowd had turned away; one or two children were crying, overcome by the horrific scene. I noticed that one of the Dutch merchants had pulled out a tiny prayer book and was holding it open in his hands, reciting quietly. But other people were laughing and joking. There was a smell of smoke round Smithfield now as well as the stink of the crowd, and something else, familiar from the kitchen: the smell of roasting meat. Against my will I looked again at the stakes. The flames had reached higher; the victims’ lower bodies were blackened, white bone showing through here and there, their upper parts red with blood as the flames licked at them. I saw with horror that Anne Askew had regained consciousness; making piteous groans as her shift burned away.

She began to shout something but then the flames reached the gunpowder bag and her head exploded, blood and bone and brains flying and falling, hissing, into the fire.

All of this in the name of Christianity, and Anne Askew’s crime was not to deny the Christian faith, it was to deny the Church’s teaching on what happened at the Mass. Anne Askew was hideously murdered by the bishops because she said the Holy Communion was no more than a memorial of Jesus.

Follow the debate on baptism and school admissions and the desire to exert power and influence has not gone away, the Church still seeks leverage over people’s lives, it still demands obedience.

Jesus of Nazareth would no more have run schools as props for an institution than he would have burned a woman alive for denying something the Church had invented. Heretics are as dangerous as they always were, now, though, they are safe from sanction. 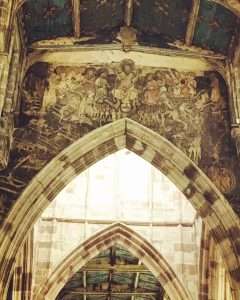