A faithful dozen gathered in a little Co Offaly church on an evening that threatened rain. A dozen is not a bad turnout on a summer’s evening, there are only three dozen people in the parish. They are gentle, softly spoken people. A people comfortable in their own skin, inhabiting the farms around for generations, they will probably remain for generations to come.

Much of the language of the church probably means nothing, but that is not a problem, they have a sense of God greater than that found in theological books. The second reading was from Saint Paul’s Letter to the Romans, it’s not easy stuff, but beginning the reading from Chapter 8, there was a desire to talk about Verse 21 in a language we all understood. To talk about what might be meant by, “the creation itself will be liberated from its bondage to decay and brought into the glorious freedom of the children of God”.

Farm people understand the bond between a person and a dog, the generations of Sheps, and Rexes and Rovers will have been loved as family members, they understand the sense of loss when a faithful servant and friend dies.

Our dog Bella died two years ago, Becoming ill one morning, she died in her bed in the afternoon, having reached the grand old age of sixteen or so (we were never certain of her age, she had been abandoned at a roadside at the age of what the vet thought might be eighteen months). At the age of three, she had been joined by Holly, another rescue dog, and they were great friends and companions for eight years, until Holly died after having gone to the vet to have a wart removed.

What Saint Paul says in this evening’s reading from Romans Chapter 8 is that Jesus’ death on the Cross frees not just human beings but God’s very creation from the burden of sin and death, he writes, “the creation itself will be liberated from its bondage to decay and brought into the glorious freedom of the children of God”.If Paul is right, then that includes all those dogs we loved so much.

I buried Bella on a June evening, finding a quiet space among the bushes she loved to explore and digging her grave with a long-handled spade. The church makes no provision for such occasions, I think there was some medieval theology that animals do not have souls, but I gathered stones to cover her grave. I picked up a stone and scratched Romans 8:21 on the wall above the grave.

There were nods of agreement when I commented this evening that dogs really were our best friends. 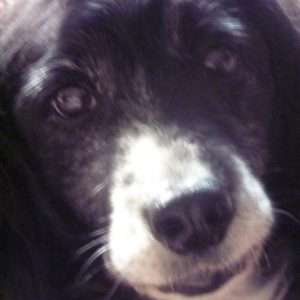