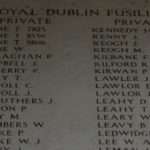 31st July 1917, the horrific and futile slaughter of the Great War claimed the lives of two poets. The graves of poet soldiers Francis Ledwidge and Hedd Wynn lie close to each other in Artillery Wood Cemetery outside of Ypres. It is a strangely attractive place to visit, an opportunity to read poetry rather than accounts of battle. There is a sharp contrast between the gentleness of their craft and the brutality of their adopted trade – and neither need have been in the trenches, Ledwidge coming from a country where there was no conscription and Hedd Wynn coming from a farm where he might readily have claimed immunity of service as a member of a reserved occupation. Yet they chose soldiering and died for their choice.

Francis Ledwidge believed that there was something in the lives of the soldiers who died that would write their names in history. A soldier’s heart was greater than any human fame:

Go from Artillery Wood Cemetery to the Menin Gate at Ypres, and, every night of the year, Last Post is sounded at 8 pm, followed by Binyon’s “Ode to the Fallen” and then the Silence before the sounding of Reveille.The Gate has 54,896 names of those Commonwealth soldiers who fell at Ypres and who have no known grave. Fifty thousand names cover a lot of space.

Search hard enough and among the fallen of the Royal Dublin Fusiliers there is the name of Ledwidge F., except this is not Francis Ledwidge. He was in the Inniskillings and, although he was recorded as “blown to pieces” by the chaplain, there was enough of him found to give him a grave. This initial and surname is the commemoration of Frank Ledwidge, son of Frank and Ellen Ledwidge, of 134 Thomas Street, Dublin. A Private in the Second Battalion of the Royal Dublin Fusiliers he died on 24th May 1915, he was seventeen years old.

Would Frank Ledwidge have agreed with Francis Ledwiidge? Would young Frank have thought that “greater than a poet’s fame” was “a little grave that has no name?” No-one held a commemoration of the death of Frank.Ledwidge. Like the tens of thousands of others, he has only an initial and his surname carved at the Menin Gate. Perhaps he lies in a little grave that has no name. Perhaps he has no grave at all, anywhere. Perhaps he was eviscerated by a shell, or drowned in the mud, or shot into so many pieces that there was not enough of him to give him his own grave.

Seventeen year old Frank might have had strong views about being remembered by having an unmarked grave. How many men would not have chosen the chance to come home? Greater than a poet’s fame would have been just being alive. 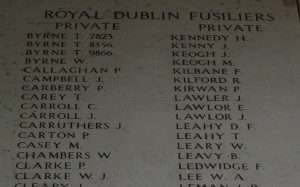