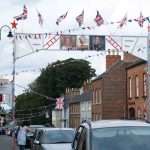 The advertising agencies obviously believe that the thought of dancing to Northern Soul music will resonate with those of a particular generation. It began with the advertisement for Shredded Wheat, their advertisement featured a man who enjoyed Northern Soul music in the 1970s, but then family responsibilities and financial constraints ended his disco-going days. Forty years later, he was making up on lost time, dressing as if it were 1975 and meeting friends at a dance hall where they again dance to the music of his youth. Now Barclaycard have embraced the idea, a man who looks after his frail, elderly mother twenty-four hours a day, seven days a week, goes to a Northern Soul disco once a week and steps out onto the floor to escape his cares.

Soul music was the backing track to a generation growing up in the 1960s and 1970s, those targeted by advertising for Shredded Wheat and Barclaycard. Records on labels like Staxx, Atlantic and Tamla Motown brought music with a youthful joy and innocence, music for its own sake, music that made you feel happy.

The advertisements must achieve their purpose within the desired markets, for television advertising is expensive and is not continued if it is not effective. In the case of Barclaycard, the intended market would not include Northern Ireland as Barclays Bank is not present there. In the case of Shredded Wheat, Northern Ireland is presumably not an intended market, for an advertisement featuring Northern Soul would find little resonance there.

Whilst 1970s teenagers in England danced at discos, “Christians” in Northern Ireland were anxious their young people should stay away from such “sinful” activity . “Christians” did not do a lengthy list of things; the usual suspects were there, drinking and dancing featured on almost every list of activities frowned upon. But there was a more general disapproval of things that were considered “worldly”. Such “worldliness” would have included the playing of records that were not religious, records that might be played at places where drink was consumed, records that might be played in order that people might dance. Northern Soul records would not often have been encountered in Ulster Protestant homes.

Why was such a social and psychological tyranny tolerated? Why were the demagogues led by Ian Paisley and his ilk allowed to impose their grim and bitter agenda upon an entire community? Watch the Shredded Wheat advertisement, watch the Barclaycard advertisement, and there is a realisation of how innocent the days of listening to those records had been, how it was an absurdity for anyone to have thought that songs by soul groups were objectionable. In a society that tolerated sectarianism, racism, sexism and homophobia, the gentle sounds of Northern Soul were a glimpse of a different world. The advertisements are a reminder that while the bigots held sway in Northern Ireland, elsewhere a generation of young people danced to a music that has power forty years later.