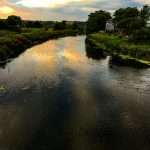 A large Dutch barn stood at one end of the barton, beyond it a line of elm trees stood on the bank of a small stream. To call it a stream probably endows it with a status it does not merit, it was barely more than a trickle, a couple of inches deep and no more than eighteen inches wide. However, it was sufficient to provide a small boy with hours of entertainment. Sticks sufficed as boats that might be raced along a length of the stream, its width allowed for three sticks to compete at any one time. He knew of the boat race, that was watched on the screen of the black and white television each year, so he would name two of the sticks “Oxford” and “Cambridge,” and, because it sounded appropriate, he called the third stick “Westminster.” He knew nothing of any of the places, but would hope that Westminster would win because it was not allowed in the proper boat race.

Water courses became a source of fascination from those those childhood years onward. Rivers on the Somerset Levels were small, slow and dull affairs. No excitement of rushing waters and weirs and rapids, no industrial usage, no barges laden with grain or coal heading for some destination that might only be imagined. Yet there was always a sense of the rivers as having a quality that touched on the magical, as if the rivers possessed some personality or power of their own, as though there were an individual spirit that shaped each of the waters.

Perhaps the real fascination of the rivers derived not from any imagined mythical qualities, but from the fact they ran down to the sea. Stand on the bank of the Yeo or the Cary, and, no matter how humble they might be, they represented a connectedness. The Yeo and the Cary ran down to the Parrett, and the Parrett drained into the Bristol Channel, and the Bristol Channel carried waters to the Atlantic Ocean, and, once the ocean was reached, one might travel anywhere that one might imagine.

The Parrett seemed always an odd name for a river, unless one was aware of its spelling, it would have been easy to have imagined coloured plumage, yet the knowledge that one might have boarded a boat in Langport to go down to Bridgwater, and then have caught a seagoing vessel, gave the water a significance that might have been missed. Connectedness means that one would never be isolated. 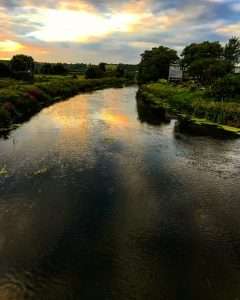