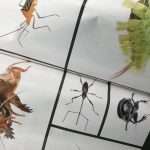 The boys had returned from their day at the local primary school with a cardboard box. A shoebox without a lid, it had been lined with green leaves and was intended as home to an exceedingly fluffy white and cream caterpillar until the same should metamorphosize into a butterfly, presumably as interesting in its latter state as it had been in its former.

“This is Sticky,” they announced with enthusiasm, “he is going to become a beautiful butterfly.”

Teatime came and afterward the boys returned to the shoebox where they had left Sticky, assuming him content in his environment. Sticky had gone. Shouts of alarm arise, “Sticky has escaped! Sticky has escaped!” The room was searched, but Sticky was nowhere to be found. It seemed unlikely that one of the dogs had eaten Sticky, but a young chi-hua-hua is at the stage where it enjoys soft toys, even having a teddy bear it carries around and throws in the air for amusement. If Sticky had not made it to safety, it seemed likely that the dog may have inadvertently eaten him. A wise adult of many years looked in at the boys in their bedroom, searching under the beds and shouting, “Sticky, Sticky.”

“Boys, the window is open. I think what has happened is that Sticky has seen the daylight and has gone out the window and down the wall.” This seem to mollify those who had brought Sticky home with such enthusiasm. It occurred to neither of them that even if Sticky had escaped and had started to make his way down the wall, he would have been easy fare for any of the numerous garden birds.

Whatever the fate of Sticky, it was a delight that boys more accustomed to smartphones, tablets, Xboxes and Play Stations should find such a passionate interest in a single, solitary caterpillar.

This week’s edition of New Scientist magazine includes a double- page photo spread of insects, photographed as if they were in the photographer’s studio. The Meet Your Neighbours project is intended to inspire people to become aware of the life all around them. It’s a pity Sticky made his escape before the magazine was published, we could have compared him with a very fluffy caterpillar featured in the photo spread.

After their disappointment at the disappearance of Sticky, perhaps the way to keep the boys interested is to combine technology and nature, to ask them to photograph those things they encounter around them, as the professional photographers have done with Meet your Neighbours. 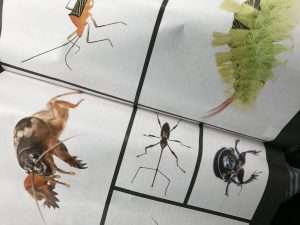