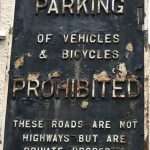 “Parking of vehicles and bicycles prohibited. These roads are not public highways, but are private property.” The age of the sign prohibiting unwelcome visitors would suggest the Church of England diocese of Bath and Wells has long had a strong proprietorial attitude.

The diocese seems not alone in holding an attitude towards property very different from that in the Bible, where the disciples sold what they had and gave their money to the poor. There seems little prospect of the Bishop of Bath and Wells forsaking his moated palace and going to live in the sort of accommodation that might have been chosen by a Galilean carpenter. In this weekend’s edition of the Financial Times Laura Battle writes on the potential effects of Brexit in rural England:

It is not only private individuals who will be affected; charitable owners of let agricultural land would see their rents slashed if profits started to tumble. The Church Commissioners, for example, own around 100,000 acres of rural or farm holdings, which are distinct from those owned by other parts of the Church of England.

One hundred thousand acres of land, just part of the portfolio of the Church Commissioners whose assets amounted to £7.9 billion according to their annual report published in May this year.

The Church of England is hardly going to admit it, but the rents it receives on its farmland are only possible because farmers receive payments under the Common Agricultural Policy, which is, of course, funded by taxpayers. Whilst the health service and education are starved of cash, taxes paid by working people contribute to the income of an institution that is already massively wealthy.

Receiving public monies in the present; in the past, the church existed entirely from involuntary levies imposed upon the whole population. The tithe system demanded contributions from all landowners and farmers, whatever their religious tradition. The great medieval churches were built on the labours of people who were often poor and struggling, demands being made of small farmers who lived at subsistence level.

It is odd that any Church of England body would talk about “private property”, perhaps one day there will be an agency that will make restitution to the ordinary English people who allowed the church to emerge. Should the Church of England undergo such a process, should it be disestablished and disendowed, as was the Church in Wales in 1920, it might rediscover the ways of the Galilean carpenter. If Brexit brings an end to the Common Agricultural Policy and brings land rents tumbling, it might be the first step toward a change for the good. 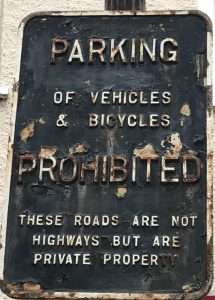