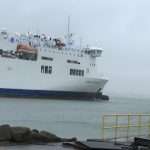 Having things down on paper made good sense.

More than twenty years ago, an employee of the Port of Larne told the story of an unfortunate occurrence. Ferries from the port sailed both to Cairnryan in Scotland and to Fleetwood, in Lancashire, in the north-west of England. The crossing to Scotland took two hours, that to Fleetwood some hours longer. On one Lancashire bound sailing a man of older years had approached a crew member to ask when the vessel would arrive in Scotland. The man had been upset to discover that he was bound for Fleetwood, it is a considerable distance from Lancashire to south-west Scotland, particularly when one is not in one’s prime.

Vehicles had carried a paper “hanger,” a hook-shaped notice that was attached to the driving mirror of the car. In bold print, it bore the initial letters of the port of destination. It should have been immediately visible both to those directing traffic, and to everyone else, that the vehicle was in danger of being allowed to board the wrong boat. Someone had not paid attention.

The scope for human error has been reduced. Electronic technology has replaced paper. A number plate scanner reads each registration, advising the person at the check-in desk how many people should be in the vehicle and to where they should be travelling. The person at the check-in desk then hands out boarding cards that resemble supermarket receipts. The paper “hangers” seem a thing of the past.

So it was, that aboard this evening’s 1810 sailing from Rosslare to Fishguard, around half an hour before the sailing time, announcements began asking the owner of a white camper van, with a registration number they repeated was asked to return to his vehicle. The announcement came again. The owners of other vehicles were then asked to return to their vehicles. Then came a request that the owner of the white camper van that was sailing to Cherbourg should please come to the information desk. It was apparent that someone had boarded the wrong boat. There was laughter when a further announcement asked if someone who spoke French could come to the information desk. The sailing was delayed by fifteen minutes or so, the master apologising that the delay had been due to “an unexpected piece of cargo.”

The hanger system was not foolproof, as the experience in Larne showed, but it was probably considerably more effective than an electronic system that allows a camper van to be on a sailing for Wales instead of France. Of course, there was the paper boarding card, but on a gale blown quayside in squalls of rain, large letters in a windscreen are more likely to gain notice than small print on a slip from a receipt roll. There’s nothing like having it in black and white. 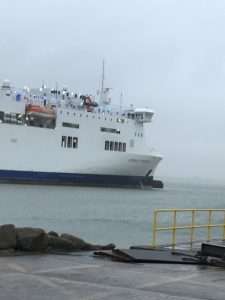