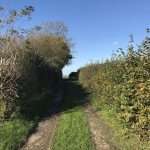 A motor accident had caused the brain injury; always a quiet and a gentle man, he had assumed a childlike innocence. If he wasn’t to be found in the house, his wife knew where he would be found; sitting on a bench at the shoreline in the tiny seaside village. Not for him the vast seascapes or the glories of a sunrise over the Irish Sea, but rather a fascination with the waves, he was intrigued with the shape and the movement of every single wave as it broke upon the beach. He believed no-one had created anything as intricate or beautiful as something everyone in the village took for granted. The passing years have taught me the wisdom of that man’s perspective, they have taught me the importance of appreciating the beauty of the ordinary.

A Dublin colleague once commented that I must be a very frustrating companion with whom to walk because of a propensity to stop and stand and stare at things. He saw little value in contemplating signposts and railway bridges and iron railings and the miscellaneous other items of a streetscape that had the capacity to fascinate me.

Perhaps a childlike self-confidence is required. Few children have a vocabulary to express an appreciation for the natural world or architecture or engineering or design, but that does not prevent them expressing a liking for a tree, or a house, or a railway engine, or a piece of furniture. Words are not necessary to the apprehension of beauty.

It is more than twenty years since the encounter with the man who sat on the shore watching the waves. Perhaps his condition was such that his days of watching the water are long since over, perhaps he is still there, still sitting on the bench delighting at the sea breaking upon the shoreline. The contentment he found in the complexity of simplicity remains an abiding lesson on enjoyment of life.

Each walk through the streets of familiar towns has become filled with the fascination the man found in the waves; things once thought unremarkable, insignificant, things that passed unnoticed, have become imbued with a new interest. How many times has a house, or a bridge, or a railing, or a postbox been passed without a second thought, without stopping to look? There seems an endless treasure trove of interest. Places visited countless times through the years are being seen through new eyes; the ordinary has become beautiful.