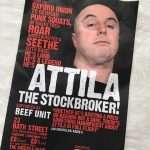 Punk poet and singer Attila the Stockbroker appeared in Frome last night. Unashamedly radically Left in his politics, he spoke of the Seventeenth Century Christian groups that were the antecedents of English political radicalism. The Diggers and the Levellers are familiar names, the Ranters are less well-known. Attila sang of Abiezer Coppe, one of the Ranters, a radical Christian group who would cause apoplexy to Christian leaders today.

The groups were united in a hope for a better world, a building of a new Jerusalem. Cromwell’s overthrow of the English Establishment gave rise briefly to all sorts of radical Christian and democratic groups, the Levellers being the foremost.

The flowering of hopes of democracy and a new society was brief; Cromwell’s Puritans created a society every bit as oppressive as that peopled by the English aristocracy. It would be three centuries and the election of Clement Attlee in 1945 before a society emerged where there would be care for everyone. The trauma of war and the misery of the preceding decade made the English determined that they were never going back to the old ways.

The disappointment of radical hopes is not something confined to the past, the 1970s and 1980s saw a plethora of radical groups hoping to build a new world in the land where Margaret Thatcher declared to Woman’s Own magazine in 1987,

“I think we’ve been through a period where too many people have been given to understand that if they have a problem, it’s the government’s job to cope with it. ‘I have a problem, I’ll get a grant.’ ‘I’m homeless, the government must house me.’ They’re casting their problem on society. And, you know, there is no such thing as society. There are individual men and women, and there are families. And no government can do anything except through people, and people must look to themselves first. It’s our duty to look after ourselves and then, also to look after our neighbour.’

Mrs Thatcher’s words were a licence to ignore problems that could only be addressed by the State, the “sink” housing estates spring directly from an abdication by Government agencies of responsibility for those who simply could not do the things she suggested.

Attila has been on the road for more than thirty years, as uncompromising at sixty as he was in his twenties. Perhaps the true test of a radical is to be able to carry on through all the disappointments and to hold on to beliefs that are unfashionable, even when everyone else has bought into the consumer society. The Diggers and the Levellers and the Ranters live on. 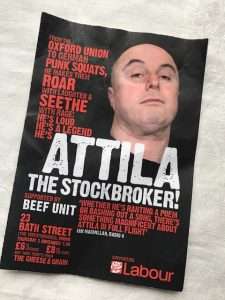