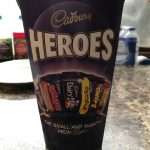 “You’ve won the bingo prize.” The lady at the Tesco checkout smiled at me, holding up my receipt.

It’s not the sort of comment one expects when buying groceries. Not having played bingo for decades, not having entered any competition, it was difficult to know why I might have won a bingo prize.

“You have won a box of chocolates,” said the nice lady, waving at a colleague to go and fetch the prize.

The colleague came to the till with two boxes of chocolates. “Roses or Heroes?”

Not a choice I had ever to make before, I went for the unfamiliar. “Heroes, please.”

The box of chocolates was handed to me and the other placed beside the till. “I win a box, as well,” said the nice lady at the checkout.”

“Oh, oh,” I stammered, “I should have allowed you the first choice. Would you like the Heroes instead?”

Hours later, I am still no wiser as to why I had a box of chocolates given to me at a supermarket checkout. Presumably, some number on the receipt had matched the number to win a prize, but nothing seemed obvious.

Wheeling the trolley back to the car, there was a sense of the world being a random and arbitrary place. If one could unknowingly win a prize in a competition one had not entered, what other things might suddenly happen, what moments might catch one unaware?

There seemed something almost Kafkaesque in such a random occurrence, uncertainty about why it happened, uncertainty as to how one should respond. In Franz Kafka’s chilling story The Trial, K. is arrested and taken for trial for no reason that is ever explained:

He could have taken it all as a joke, a big joke set up by his colleagues at the bank for some unknown reason, or also perhaps because today was his thirtieth birthday, it was all possible of course, maybe all he had to do was laugh in the policemen’s face in some way and they would laugh with him, maybe they were tradesmen from the corner of the street, they looked like they might be – but he was nonetheless determined, ever since he first caught sight of the one called Franz, not to lose any slight advantage he might have had over these people. There was a very slight risk that people would later say he couldn’t understand a joke, but – although he wasn’t normally in the habit of learning from experience – he might also have had a few unimportant occasions in mind when, unlike his more cautious friends, he had acted with no thought at all for what might follow and had been made to suffer for it. He didn’t want that to happen again, not this time at least; if they were play-acting he would act along with them.

Act along with them? Always a good piece of advice? However, if a box of Heroes is the worst mysterious thing that might happen, then the world is not such a malevolent place. 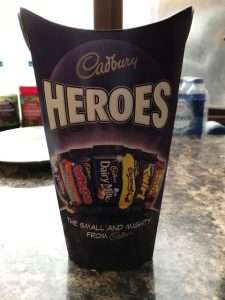