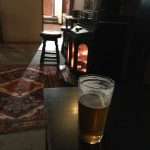 A favourite moment in Lord of the Rings, that book beloved of pubescent boys, is Strider the ranger sitting in the shadows in the Prancing Pony Inn at Bree. It is not that Strider goes on to be revealed as Aragorn, king of Gondor, nor that he is a heroic swordsman and extraordinary fighter, nor that he is a natural leader who assumes command of the group who will save Middle Earth from conquest by the Dark Lord; it is that he is content with his tankard of ale and a quiet corner in a pub by himself. There are few more inviting prospects when by oneself than a pint of bitter and a tranquil room in which to sit by the fire.

Walking to the postbox on a sharp January evening, Orion and the Great Bear were prominent in the sky, a half moon cast light on the unlit road. Reaching the green, there was an inclination to walk to the village pub, which might or might not be open (in a pub in Ashburton in Devon last summer, an attempt to buy a second glass of beer at quarter past five in the afternoon brought a sharp retort from the bartender that last orders were at five o’clock on a Sunday). There were no external lights, but peering through the window, the fire was glowing brightly. Going in the side door, there was a notice at the bar, “Ring Gong 4 Service.” A single stroke of the brass gong brought a genie-like appearance of the landlord, seemingly from nowhere.

“A pint of bitter, please.”

The beer was pulled and retiring to a seat in the corner of the empty room, there was a sense of peace and contentment, and a feeling sorry for Strider who became Aragorn, in our village there are no orcs or trolls to be faced. 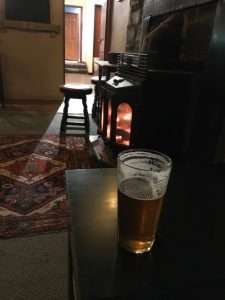