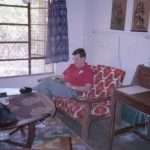 This week’s New Scientist cites a report from Nature that modern society is unworkable, that our appetite for things, even in poorer countries, is unsustainable. The report says:

Physical needs such as nutrition, sanitation, access to electricity and the elimination of extreme poverty could likely be met for all people without transgressing planetary boundaries. However, the universal achievement of more qualitative goals (for example, high life satisfaction) would require a level of resource use that is 2–6 times the sustainable level, based on current relationships.

Being someone whose resource use has been at the higher end of the scale, the question of “high life satisfaction” intrigues. The New Scientist article notes that “consumption doesn’t seem to lead to a better life” and concludes that we should target “things that genuinely matter to people, like health, happiness, meaningful employment and equality.” To know these things did not require an academic study; living in an affluent community would have provided an abundance of possible case studies. The more fundamental question is why consumption is a necessity for us and why those things identified as the desirable targets are not sufficient.

Visiting Tanzania twenty years ago, a two day journey by road brought our small group to a village called Liuli on the shores of Lake Malawi. The chief economic activity was a one hundred bed hospital, supported by German missionaries, a hospital that served a huge hinterland, and a German tropical fish project, the fish being flown out from the dirt airstrip in large tanks on a monthly basis. The fish project was run by a quiet Czech man called Charles, who was fluent in German, English and Swahili, as well as his native language. He lived in a brick bungalow with a galvanised iron roof and glazed windows. He had running water and a flush toilet in his house, it was comfortably furnished, well-stocked with books, and, in the evenings, he listened to the German world service on a short-wave radio. Sunny days, beautiful countryside, fertile land, abundant food, books to read and a radio on the sideboard, Charles’ life seemed idyllic, what more, in material terms, could one desire?

The days in Liuli have often been a cause for reflection, why is there a need for so much “stuff,” when it is possible to find contentment with so little? Presumably, Charles’ lifestyle was within the realms of sustainability, so perhaps the useful research would be to discover why people like him found high life satisfaction in minimalist living, why they felt no requirement to pursue consumption. If we knew why we do what we do, we might find it easier to stop doing it. We might find the secret to sustainable wealth. 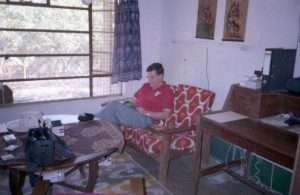