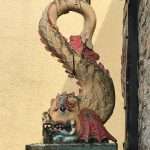 Walking up Bow Street in Langport, the sign for The Dolphin pub is still mounted on a wall. The pub itself closed some years ago, but its distinctive and disturbing sign remains a feature of the street. The pub first appears in records in 1778, so perhaps an Eighteenth Century craftsman imagined that the fearsome beast he carved resembled a dolphin. A fearsome beast it was, a child passing in a motor car thought it more resembled a monster from the deep than a friendly creature like a dolphin; its red fins and ferocious teeth being the stuff of a small boy’s nightmares.

Creatures from the sea were not as frightening as gas pipes. The primary school at Long Sutton stood on the village green at the corner of which stood a house where a mother and her son had died following a gas leak. It was not a leak in their house, for they had no gas supply, but a leak from the gas main that passed down the street.The curtains of the house seemed always drawn, making it impossible to imagine what it might be like on the inside; but the sight of the house became something frightening, asking questions about how many gas pipes there might be about which we did not know and how many of those might pose a threat. It was a source of relief that the village to which we moved in 1967 had no gas supply.

Monsters from the deep and gas from the streets might have been sources of fear, but neither were nearly as potent as thunderstorms with their threat of bolts of lightning. The farmer who had lived at the foot of the hill which our road descended was always recalled as a quiet, softly-spoken man, a man who had worked hard all his days; his family were gentle people, people who laboured hard and who spoke kindly of all. It was said that it was a pitchfork that had caused him to be struck. He had been carrying hay out to cattle and it was said that the iron prongs of the fork had served as a conductor for the bolt of lightning that had killed him. At the first rumble of thunder, a fearful child would run to the house, if lightning could strike on a farm so close to our home, who knew that it might not strike again?

Fifty years later, it is hard to imagine a primary school child fearing very much, least of all sea monsters, gas pipes or lightning bolts, perhaps there is a new set of things that give people goose bumps. 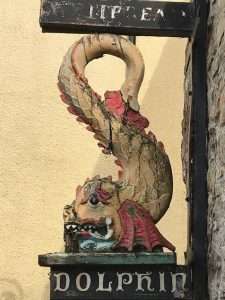