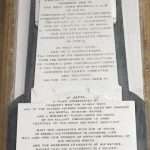 The prose of Victorian memorial tablets can sometimes be so lengthy that one does not trouble to read the inscription to its conclusion, or to ponder what the words might mean.

A large, two part white marble tablet on the wall at the sanctuary steps at the redundant All Saints’ Church in Langport is lengthy in its words; it is in its final lines that there are words to prompt thoughts.

ERECTED
IN MEMORY OF
EDWARD THOMAS MICHELL
YOUNGEST SON OF
THE REV JOHN MICHELL L.L.D.
OF HUISH
COMPANION OF THE ORDER OF THE BATH,
COMMANDER OF ISABELLA THE CATHOLIC,
AND KNIGHT OF ST FERDINAND,
AND OF CHARLES III OF SPAIN.
LT COLONEL IN THE ROYAL ARTILLERY.
AND BRIGADIER GENERAL
COMMANDING HER MAJESTY’S FORCES
IN SYRIA.

IN THAT HOLY LAND,
AND IN A SACRED CAUSE,
THE RESCUE OF ITS CHRISTIAN INHABITANTS
FROM THE OPPRESSIONS OF THE EGYPTIANS,
HE CLOSED A LONG AND BRILLIANT CAREER
IN THE PUBLIC SERVICE Of HIS COUNTRY,
HONORED, ESTEEMED, LAMENTED,
AND BELOVED.
ON THE 24TH JAN. 1841 AGED 54.

AT JAFFA,
A PLACE CONSECRATED
BY FREQUENT MENTION IN HOLY WRIT
AND TO THE CLASSIC AUTHORS WHOM HE LOVED NOT UNKNOWN
HIS MORTAL REMAINS REPOSE.
AND A MONUMENT PLACED ABOVE HIS GRAVE
BY HIS GALLANT COMPANIONS IN ARMS
TESTIFIES TO “HIS GREAT AND NOBLE QUALITIES”

MANY WHO ASSOCIATED WITH HIM IN YOUTH,
OR SHARED HIS FRIENDSHIP IN ADVANCING LIFE
WILL LOOK UPON THIS TRIBUTE OF AFFECTION REMINDFULL OF
HIS PRIVATE WORTH
AND THE GENEROUS FRANKNESS OF HIS NATURE,
RATHER THAN HIS ATTAINMENTS AS A SOLDIER.

Why would a memorial to someone who had obviously achieved much in public and military life conclude in such an enigmatic manner? An Internet search produced the Parliamentary papers recording the correspondence relating to the British operation in Syria, an operation to support the Ottoman Empire in its opposition to Egyptian forces that had invaded. The letters reveal General Edward Michell as a pragmatist and a peacemaker, a man very different from many of the leaders of his time.

The letters show Michell as a soldier averse to speculative action, averse to unnecessary casualties, averse to disproportionate use of force. Writing on 12th January 1841, Captain Houston Stewart, the commander of the British naval vessels deployed in the operation, indicated he and Michell would not use force without reason:

There appeared to General Michell and to me such an evident and imminent hazard in this operation, and so inadequate an object to be gained, so much evil would result from a retrograde movement, such disaster from defeat, that I declared I could be no party to it, and that so long as it was not ascertained beyond doubt that Ibrahim Pasha was not coming on Gaza, I could not afford any naval co-operation.

Not only did Michell wish to avoid unnecessary conflict, he facilitated the honourable withdrawal by enemy forces. In a letter to the commander of the Egyptian forces on 17th January 1841, he wrote:

We have the honour to inform you, that we have received official instructions, to the effect that Mehemet Ali having made his submission to the Porte, which has been accepted, his Highness is now re-instated in the Pashalic of Egypt; and we are ordered to afford every facility for the evacuation of Syria by the Egyptian troops under the command of his Excellency, Ibrahim Pasha. An Egyptian officer, sent by Mehemet Ali Pasha, accompanied by a Turkish and two English officers, go off from this place to-day, in search of Ibrahim Pasha, being the bearers of despatches from Mehemet Ali Pasha, requiring him immediately to withdraw, with all his troops, from, Syria. We therefore most earnestly call upon you, most strictly to abstain from every act which can tend to provoke any renewal of hostilities, and we promise you in return, that our Allies the Turks shall refrain from any aggression towards you. All plundering, and even foraging, must be strictly forbidden, otherwise we shall hold you responsible for the consequences, which in that case we should not have the power to control.

(Signed) – EDWARD MICHELL, Brigadier-General commanding the British Troops on the Coast of Syria.

P.S.—The officers who proceed in search of Ibrahim Pasha, will go by Jerusalem, Jericho, and Izatt, but if you know of any more direct route by which letters might reach his Excellency, we request you will not lose a moment in forwarding to him copies of this and the other documents transmitted to you from hence.

Edward Michell fell ill during the evening after he wrote that letter and died five days later. Were his memorial being written now, comments on his attainments as a soldier would stress his “private worth” and “generous frankness,” qualities that obviously safeguarded the lives of soldiers and civilians. Perhaps the words are enigmatic because the qualities were atypical, certainly, they were qualities that were still lacking seventy-five years later when commanders recklessly threw away lives on the Western Front. 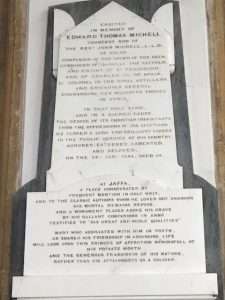