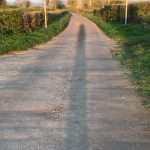 The first evening of summer and voices carry on the warm air; a group of young men play football in the village playing field. The field is well-equipped: a children’s play park with climbing-frame, slide and swings; a basketball hoop; a BMX cycle track; a zip wire; and two sets of soccer goals. It would have been a delight to boys in the past. It seemed a pity that the only ones gathered there were the footballers, a group of twenty-somethings. Where were the younger people?

Such fine evenings in the past were times to be enjoyed to the fullest extent. There were three channels on the television, none of which would be showing anything of interest to boys. BBC Radio 1’s 247 metre frequency was occupied by Radio 2 after seven o’clock in the evening. Electronic devices comparable with those now used unthinkingly were only to be found on Star Trek; it is said that a single iPhone now has a greater computing capacity than the mission control of the Apollo space programme at Houston. The only reason to remain indoors would be to read a book, and who would stay inside and read when the sun was shining?

Sometimes there were games of football or cricket in whatever neighbouring field was empty of livestock. Sometimes there were bicycle races around the village roads: traffic must have been considerably quieter to allow boys to race at two or three abreast without fear of collision with an oncoming vehicle. Sometimes there were evenings spent at a friend’s house, playing badminton on the big lawn at the back, or enacting combat scenes from the World War II Commando comics we read with enthusiasm. A signal system existed between us, if he put a wooden board covered in luminous orange paper in an upstairs window of his house, which was visible from our house, I was welcome to call. Sometimes hours were passed just mooching around, doing nothing in particular, talking, but about what, it is hard to imagine.

Oddly, there remains no recall of the evenings there must have been when it was grey and damp, when the rain poured, when going outdoors was not an option. There must have been evenings spent watching Panorama or This Week or something incomprehensible on BBC 2, yet such summer nights are forgotten.

The silliest game of all was stamping on the shadows of one’s companions, as the evening progressed, it was increasingly difficult to avoid stamps. Walking the road this evening, there was the realisation that, tonight, I would almost certainly have lost the game. 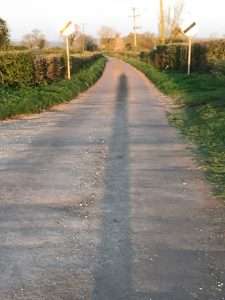