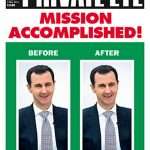 It was in 1970 that The Temptations released their song “Ball of Confusion”, the lyrics described the global situation at the time in quick, impressionistic lyrics. The final stanza includes the suggestion that the only safe place to be was a Native American reservation:

Fear in the air, tension ev’rywhere
Unemployment rising fast,
the Beatle’s new record’s a gas,
and the only safe place to live is on an Indian reservation,
and the band played on
Eve of destruction, tax deduction,
City inspectors, bill collectors,
mod clothes in demand,
population out of hand, suicide too many bills,
hippies movin’ to the hills
People all over the world are shouting end the war
and the band played on.

Were the song being written fifty years later, the material available to the writers would be even more plentiful than it was in 1970.

The cover of this week’s edition of Private Eye carries a banner feclaring “Mission Accomplished.” Beneath the headline are two identical photographs of President Assad of Syria, one with the caption “Before” and the other with the caption “After.” The United States, Britain and France spent tens of millions on a missile attack against Syria, claimed success in inhibiting Assad’s violence against his own people, and changed nothing.

Of course, the last thing they would want is for the egregious Assad regime to be overthrown for the alternative would be a Syria controlled by the rebels, men associated with the ISIS movement whose human rights record is even worse than that of the Syrian government. Even the premise for the attack has been questioned critics of the West. The Organisation for the Prohibition of Chemical Weapons is still investigating the alleged chemical attack in Douma whilst Russia claims that the allegations that the Syrian government undertook such an attack is an “obscene masquerade.”

Whatever the truth in Syria, there will be no happy ending, each alternative is obnoxious. As long as it suited its purposes, the United States maintained cordial relations with the Assad regime, including using it as a place for interrogation and torture of suspects brought there by the “extraordinary rendition” programme. United States’ antagonism towards Syria has ensured active Russian intervention in support of Assad, yet it was not so long ago that President Trump and President Putin were declaring friendship for each other.

There is no solution to the Middle East conflicts that does not mean significant suffering, and the suffering will not be among the politicians or military commanders. Private Eye is right, nothing changes, ball of confusion is a model of clarity compared to what the world is today. 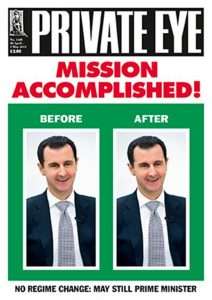