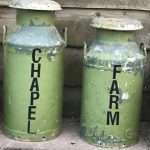 Milk churns seem now to be collectors’ pieces, purchased at premises specialising in reclamation and vintage items. Unused churns that once might have lain rusting in the corner of a yard are now put to new uses.

On my grandfather’s farm, milk churns were a measure of income. In summertime, when all the cows were in milk, there would have been ten put out each morning for collection by the lorry from the Milk Marketing Board.

Each evening the herd would be brought back to the farm, each cow having its own place in the stalls. An electric milking machine in the dairy provided suction to the milking buckets. Filled buckets were emptied into the churns, a full-sized full churn held ten gallons. At breakfast time each day, my grandmother would fill in brown card labels identifying the milk’s farm of origin. There was a short spike, perhaps half an inch long, on the neck of each churn to which the labels would be fixed. There must have been occasions when labels became detached, when the provenance of a churn was unclear, perhaps the Milk Marketing Board worked on the basis of the average number of gallons received from each herd and were untroubled by the odd gap in the records.

The weight of each churn must have been significant, 10 gallons of milk plus the weight of the churn itself. The full churns would have been lifted onto a hand-pulled trolley and taken out to a concrete platform at the roadside. To be the driver collecting the churns each morning demanded strength and agility, manhandling full churns onto the flat-bed lorry and replacing them with empty ones for the next day’s supply. From the local milk factory, milk was collected by train and transported to London on a stopping train that rolled slowly through the night.

Had I ever been able to afford one of the fine stone houses that were once the dwelling houses for local farms, I think I should not have been content to have one or two decorative churns at the gate, ten or more would be more cheering – a visual reminder of a farming world that has now disappeared, and a sign that one had a few pounds in the bank. 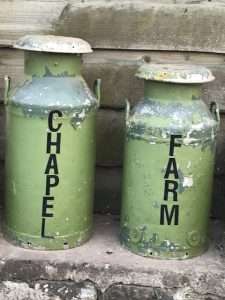