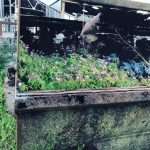 The creak of a corrugated iron gate swinging in the wind might have been something from one of those American movies where silence is the harbinger of alarm. The only sound in the evening air, it created a sense of isolation and desolation. The metal structures were decaying, becoming skeletal. Machinery lay deserted. A tractor stood forlorn, its bonnet removed, its engine missing components. In the foreground, beside the road, a slurry spreader had been parked; rust had eaten holes in its metalwork, vegetation had colonised its interior.

The former farm seemed a metaphor of human existence, a visual reminder that every human artifact is a thing of transience, a thing that will eventually succumb to the elements, a thing the place of which will eventually be reclaimed by the Earth.

There is an absurdity in the anthropocentric understanding of the world, the vain belief that our species present only for a tiny fraction of our planet’s history should represent the final iteration of its story.

Nevil Shute’s post-apocalyptic novel On the Beach, tells of the final days of humanity, those left in southern Australia after a global thermo-nuclear war has eliminated all signs of life elsewhere. The last survivors are awaiting the clouds of radiation that will bring an end to their lives. A naval officer believes it to be the end of the world, in an oddly upbeat retort, a scientist asserts that is nothing of the sort:

“It’s—it’s the end of the world. I’ve never had to imagine anything like that before.”

“It’s not the end of the world at all. It’s only the end of us. The world will go on just the same, only we shan’t be in it. I dare say it will get along all right without us.”

“I suppose that’s right. . . .”  He paused, thinking of the flowering trees that he had seen on shore through the periscope, cascaras and flame trees, the palms standing in the sunlight. “Maybe we’ve been too silly to deserve a world like this,” he said.

Humanity is not just silly, it is arrogant in its assumptions that the planet exists for human convenience, its creation narratives are used to undergird a culture of exploitation and irresponsibility, yet, in the end, it will be exploited nature that endures the predations of humankind.

It is two hundred years since Shelley published his sonnet Ozymandias, a poem reflecting on the futility of human aspirations to permanence.

I met a traveller from an antique land,
Who said—“Two vast and trunkless legs of stone
Stand in the desert. . . . Near them, on the sand,
Half sunk a shattered visage lies, whose frown,
And wrinkled lip, and sneer of cold command,
Tell that its sculptor well those passions read
Which yet survive, stamped on these lifeless things,
The hand that mocked them, and the heart that fed;
And on the pedestal, these words appear:
My name is Ozymandias, King of Kings;
Look on my Works, ye Mighty, and despair!
Nothing beside remains. Round the decay
Of that colossal Wreck, boundless and bare
The lone and level sands stretch far away.”

Perhaps rusting iron frames and corroded metal are now the things that speak the warning once spoken by shattered stone. 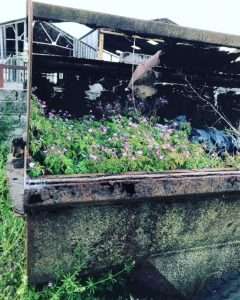