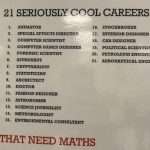 “21 seriously cool careers that need maths,” says the poster on the wall of one of the mathematics department classrooms. Being a teacher is not among the twenty-one.

Once, I asked a class in Dublin, “would you like to be a teacher?”

I remember that just three of them answered “yes,” and the answers were for things like having long holidays rather than anything to do with the job itself. The rest of the class told me that school was boring and being a teaching would be boring. Perhaps it was just the perspective of middle class suburbia that skewed the answers, perhaps they aspired to far more lucrative employment. Perhaps the same question asked in a rural community, or in the inner city, would have produced a raft of different answers; perhaps there had been a shift in perceptions.

In rural Ulster in the early-90s, traditional attitudes persisted. The principal of the local village primary school was referred to as “Master McCann” rather than “Mister McCann” by the people of the village. It seemed a quaint but pleasant custom, perhaps an acknowledgment of times past when the schoolmaster was one of the few people of learning in a mostly unlettered community, but, probably more importantly, a mark of respect for the post. Had the people not held the principal in great affection, they might have called him many other things.

The school was at the heart of the life of the community, its calendar shaping village life and its joys being joys shared by the whole village. It would have been be hard to have imagined imagine that the overwhelming majority of a class would have dismissed the thought of teaching, while the remaining three were half-hearted. The school teacher for them was someone held in respect by their entire community.

Growing up in this corner of rural England, the teachers at our village school would have been treated with a deep respect; there was a deference, even a fear, felt towards them. Had we been asked about teaching, we might not have been anymore enthusiastic about such a career, but we would probably have been a good deal less dismissive.

Perhaps teaching was never a seriously cool career, and being good at maths would have offered much more enticing prospects. No-one who could be an astronomer or a doctor would be likely to opt for years in the classroom, but it is a pity that even a school mathematics poster does not even suggest a career as a teacher. 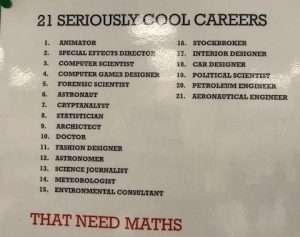