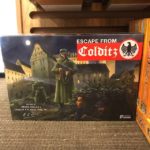 You would not need a calendar to know that Christmas is nine weeks away. Shops are full of seasonal fare (including foodstuffs which have “use by” dates that are well in advance of the big day. Waterstone’s is not going to miss out on the opportunities presented by the annual tendency for people to spend more than is wise and has increased its stock of toys and games in the hope of catching the eye of those who come to buy books.

One game definitely caught my eye. Beneath a table piled high with numerous other board games, there was Escape from Colditz. The last time I saw Escape from Colditz was in a friend’s house in our village, it must have been around about 1973. Kneeling down on Waterstone’s carpet, I gave the box a closer examination, had it been in a storeroom for the past forty-five years? It had a lid that looked very similar to the one I remembered, it was even signed by Major Pat Reid, who had been a among those who had been held in the infamous prisoner of war camp. Despite its first appearance being at the time of BBC television series that was screened between 1972 and 1974, this was a new version of the game.

What was striking was that there seemed a huge number of board games on sale. Various incarnations of Monopoly were plentiful. Along with the classic version, there were things like Star Wars Monopoly and Game of Thrones Monopoly, but Monopoly has never gone way. It has always been possible to go into a high street shop and buy Monopoly. Escape from Colditz is definitely a game from a former time, a revival of something that had probably been forgotten by everyone but the board game enthusiasts.

What has happened to consumer trends? Has there been a turning away from the desire to have everything in an electronic form? Have the X Box and Play Station and the online platforms and smartphone games begun to lose some of their attraction? Has the impersonal remoteness, that borders on existential isolation, brought by electronic gaming with people who play under pseudonyms, and live in different countries and time zones, begun to be replaced by a desire for something more authentic? Is there a trend analogous to the revival of vinyl as a medium for recorded music? Have people decided that there is nothing to match the tangible and the tactile, and that there is nothing like playing a real game with real people? 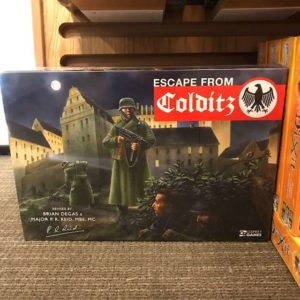