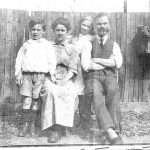 Four days until the armistice, my great grandfather would have been in the Labour Corps at this point, where he might have been serving is unknown, so many of the records were lost during the bombing of London in the Second World War. His military service in the Great War can be summarised in two paragraphs:

Perhaps that should be enough, it is more than is known about many casualties of that awful conflict. At the centenary of the beginning of the Great War, I searched the Commonwealth War Graves Commission website for what might have happened; it showed no deaths among the ranks of the 6th Battalion of the Somerset Light Infantry on 21st October. A day later, thirteen members died, not one of whom has a known grave. Were they blown into so many pieces that they were unidentifiable? Were they drowned in the mud? Were they eviscerated completely? The battalion had been involved in hostile action that day, but what had happened the day before?

The 6th Battalion of the Somerset Light Infantry was part of the 14th Division, which was part of the British Second Army. The Wikipedia description of the Second Battle of Passchendaele says, “On 21 October, wire-cutting began on the Fifth and Second Army fronts”. Was that what happened to Charlie Bennett? Under the cover of a bombardment by British artillery, had he been one of those sent out to cut the wire? Had German soldiers in a forward trench spotted him and opened fire on him? Did the bullets leave him lying there until comrades carried him back to safety?

Finding the battalion’s war diaries at the National Archives website, I looked at the entries for 20th-22nd October 1917, I found the battalion in Sanctuary Wood and then at the frontline.

Fine. Hostile aeroplanes active early hours of the morning. All men on carrying or working parties. Enemy shelled SANCTUARY WOOD from 9.40 AM-11.20 AM. All calibres. Ration party brought back 12 German prisoners to Bde. 2 killed, 7 wounded.

Fine. SANCTUARY WOOD shelled with 155 mm at 3 AM & again all calibres at 5 AM. Working party, 2 officers 70 other ranks dug 120 yds trench under orders Bde signals. DCLI relieved in front line at 8.40 pm. SOS went up North at 5 pm

The diary suggests that casualties on 22nd October were as a result of artillery fire, so Charlie Bennett, who is recorded as a casualty on 21st October seems to have been one of the casualties of 20th October, especially as he was transferred to Le Treport on 23rd October. The two men killed that day are both buried at Lijssenthoek cemetery, which was the burying ground for the hospital through which Charlie Bennett passed, suggesting that he was among those who captured the twelve prisoners who were brought back to the brigade headquarters by the ration party.

At a time when the lines were static, does that mean he was part of a raiding party, sent to capture prisoners in a search for intelligence? The full story will never be known. As the days passed towards the armistice, what thoughts would have passed through his mind? As he reflected on the things he had seen and heard, could there ever have been words adequate to express all that he felt?

Charlie Bennett did die in a World War, as a result of injuries sustained after a bombing raid on London in 1944. He now stares out from black and white photographs, a man remembered for his quiet gentleness; a man who never told stories of his war. 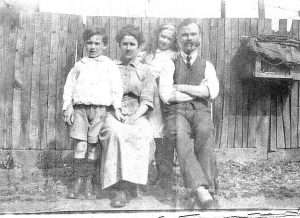