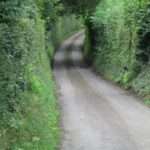 A gentleman of the road. It is years since I last heard the term used, forty years or more since I last saw one. The last gentleman of the road I recall seeing was on Telegraph Hill, a steep road between Exeter and Plymouth. To walk the road at Telegraph Hill now would be to put your life in immediate danger from the lanes of traffic moving at 70 mph. It must have been a regular route for the old gentleman, for even in the 1970s the traffic was busy.

Of course, we didn’t call them “gentlemen of the road,” we called them tramps, but I do not remember it as having a pejorative meaning. A tramp was simply someone who tramped along, dressed in old and sometimes ragged clothes and carrying his few possessions in a bag or bundle.

Gentlemen used regularly to call at my grandfather’s farm; he said they left a mark on the wall outside to show that the next passer by would receive a welcome. They were given bread and cheese and tea and milk and would sleep in a stone barn. One cold night, my grandfather took pity on a passing gentleman and allowed him to sleep on the settee in the living room, where there was the warmth of a log fire. On discovery at there being an unexpected house guest, my grandmother flew at my grandfather, did he not realize that they could have been killed in their beds or had all their valuables stolen? The story became a matter of pride for my grandfather.

One gentleman used to call each year with a chapel family in the village. Strongly evangelical Christians, they attended worship each Sunday and expected visitors to join them. One summer Saturday, my other, a hairdresser by profession, received a call. The gentleman had arrived with the family and he had been given a bath and clean clothes and they would be grateful if my mother would give him a haircut. My mother explained that she did not generally work on Saturdays, but was prepared to make an exception. The gentleman went to chapel the next morning looking altogether different from the appearance he usually presented.

My mother’s recall of the gentleman is of a man who was educated and cultured, a man who had seen much in his lifetime. The gentlemen were always enigmatic figures, no-one was ever sure from where they had come or where they were going. What had caused them to take to the road? What family or friends had they left behind?

Perhaps there are still gentlemen out there, somewhere. Perhaps it’s just that they no longer pass this way. 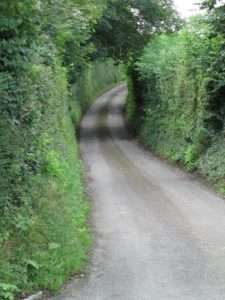