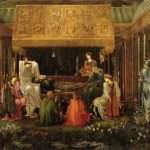 In the dying light of the winter evening, the moorland to the north and south of the ridge that forms the Polden Hills was only greyness and shadow, were there to have been a barge carrying a mortally wounded king to his final rest at Avalon, it would have been difficult to discern among the unidentifiable shapes.

BBC Radio 3’s Words and Music programme accompanied the drive along the winding road that would have taken me to Glastonbury if I had not turned off the ridge and dropped down to the moorland that lies between the hills and our village. The land around High Ham is a mere three hundred feet above sea level, but it rises from fields that lie three hundred feet below.

The programme was about the pre-Raphaelites, those Nineteenth Century artists who threw aside the conventions of their time and whose work was met with varying degrees of approval. Works of the pre-Raphaelite Brotherhood inspired by the legends of King Arthur prompted the reading of lines from Thomas Malory’s Morte d’Arthur, lines telling of Sir Bedivere’s throwing of Excalibur into the waters and of a boat coming for the dying king.

So Sir Bedivere came again to the king, and told him what he saw. Alas, said the king, help me hence, for I dread me I have tarried over long. Then Sir Bedivere took the king upon his back, and so went with him to that water side. And when they were at the water side, even fast by the bank hoved a little barge with many fair ladies in it, and among them all was a queen, and all they had black hoods, and all they wept and shrieked when they saw King Arthur. Now put me into the barge, said the king. And so he did softly; and there received him three queens with great mourning; and so they set them down, and in one of their laps King Arthur laid his head.

Perhaps among the sedge and the peat and the withy trees, Excalibur still lies waiting to be found.