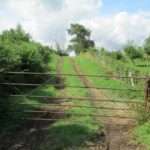 The postmen drove red ones and the Post Office telephone engineers drove bright yellow, my uncle’s Bedford van was white.  It remains fresh in the memory.

In childhood, I loved going out with him as he did the farm rounds: checking livestock; drawing water from wells; moving electric fences; delivering bales of hay; tying gates firmly.

One summer’s evening, he had parked at the roadside and gone from the van to check cattle, telling me to stay in the van.  It was a fine summer evening and I sat looking out at the hedgerows and watching the occasional car that passed.  The quietness was broken by the sound of a motor cycle pulling up.  It seemed a strange thing: who would be stopping behind the van on this stretch of country road?

There was a huge noise as a fist came down on the roof of the van and a man’s face appeared, glaring in through the open driver’s window: the helmet and goggles and dark uniform of a member of the Bath and Somerset Constabulary.  Policemen terrified me, and here there was one only a few feet away.

“What are you doing here?” he barked.

“Waiting for my uncle”, I said, trembling in fear at the aggressive apparition.

“Looking at cows”, I answered.

“You tell your uncle, I want to see him”.  He slammed his hand down on the roof again and stamped his way back to his motor bike.  The machine started with a roar and sped down the road.  As soon as it was out of sight, I opened the van door, slipped through the nearest gate, and headed across the field back towards the farm: I wanted no more encounters with constables.

My uncle had returned by this point and called out to me, “Where are you going?”

The whiteness of the van and the greenness of grass, fresh from summer rain, are as vivid now as fifty years ago.

In retrospect, it seemed a strange interlude.  What did the policeman expect when he stepped off the motorbike?  Had he wished to speak to my uncle, why had he not simply called at the farm?  When he saw no-one in the driving seat of the van, why did he not simply get back onto the bike and ride off?

In retrospect, it seemed not much more than an attempt to intimidate a child; an attempt that certainly succeeded.  For years it left me with a suspicion of police officers, I was convinced that they regarded bullying as part of their duties and developed an irrational sense of fear and guilt whenever in their presence.

If there ever was business with my uncle, it would never have been too serious: there was one offence of driving a tractor without number plates or proper lights, and another of using dustbin lids as cymbals on one occasion in Yeovil. My grandfather would have been caught for similar offences in former times – he was once fined 2/6 by a magistrate for being on a bicycle without a lamp “properly trimmed and lit.”

A country bobby hammering on a van roof seems to belong to a mythical world, but, then, I wonder how many more children were intimidated by oafish behaviour? How many grew into adulthood with a deep suspicion of those whom we were meant to trust? 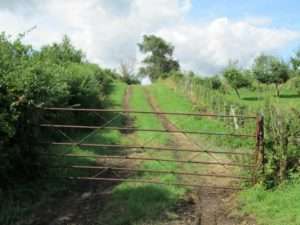