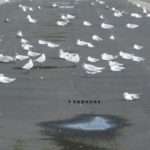 The second half of the term begins tomorrow, the lateness of Easter means it is a longer term than some years, the good weather will hopefully mean the student body will return in a happy mood. As well as student teachers who are learning the craft, there are three things that unsettle a class in our area – windy days, heavy rain, and gulls. At a school close to the sea, gulls are everyday visitors, not that salt water is a requirement for their presence.

In my childhood days in here in Somerset, it used to be said that the presence of the gulls inland signified bad weather at sea; I never knew whether the assertion was true. We lived 15-20 miles from the sea and the gulls were not uncommon. In the autumn, when the plough would turn over the stubble left by the summer crop; the gulls seemed to appear by the flock. Perhaps it was stormy at the coast; perhaps they were just chancers, making the most of the opportunities that came their way.

Collins’ Birds of Britain and Europe says that herring gulls are, “Very sociable, often on waste tips” and that their food is, “fish, small animals, carrion, waste.” The eating of small animals casts them in a different light from their pretence of being benign creatures forming part of picturesque landscapes as they sit on mooring posts and at the top of masts. It also shows them capable of flexibility, of being able to adapt to their circumstances as necessary.

Maybe gulls are the ultimate natural survivors. Well, perhaps not the “ultimate,” that accolade would be shared by cockroaches, which seem immune even to being jumped on; and rats, which once climbed the leg of the table in a place where I was staying in the Philippines and made off with half the packet of Carr’s Melts that I had taken six thousand miles with me for comfort eating (I hadn’t the heart to eat the remainder of the packet!). However, in the event of a nuclear holocaust, the cockroaches and the rats would probably not have the planet to themselves.

The gulls seem to have extraordinary communication system. How do they know to leave their seaside town on an autumn afternoon because Farmer Giles is ploughing the top ten acres outside a village twenty miles away? Do they have scouts who fly around thinking to themselves, “Wheat’s been cut there, there’ll be a plough there before the month is out?”

The ability to adapt rapidly to changed circumstances; to be able to survive in an environment very different from what’s been familiar; these were traits that the gulls once shared with human beings. Somewhere we humans have lost the capacity to adapt, to adjust to our circumstances. A sudden change in a human situation does not evoke a gull-like response, instead it prompts the expectation that someone, somewhere, should do something. Sometimes there is nothing to be done, except to try to cope. Perhaps gull-like political leaders would be good; people who could show the rest of us how to adapt; people who could lead us out of a mess.

Maybe there is a lesson in the gulls. 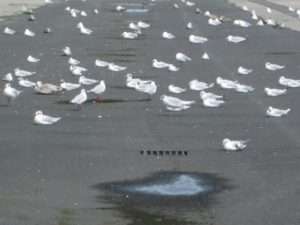