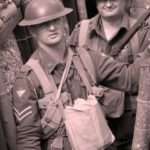 There is a moment at the end of Oh! What a Lovely War where a group of British officers from the general staff arrive outside a building in limousines. A parade has been formed and as the officers begin the inspection, a group of Anzacs, tired and dirty and battle hardened, survey the scene. One begins to sing and the others join in a marching song from the time – sung to the tune of John Brown’s body:

It is a surreal moment in a frequently surreal film, but there was much that was surreal in the Great War; much that was absurd and futile and pointless.

ANZAC Day remembers all the fallen of the Australian and New Zealand forces, it falls today, 25th April, because that was the day in 1915 when the landings at Gallipolli took place. Despite extraordinary bravery on the part of the soldiers, the campaign was a disaster. Allied deaths totalled over 56,000, including 8,709 from Australia and 2,721 from New Zealand. How must it have felt to have travelled halfway around the world to lie on a beach in Turkey, pinned down by gunfire? How must it have felt to be evacuated after eight months having seen friends and comrades die in an expedition that achieved nothing?

Oddly, while it is Gallipolli that is always remembered, it was not the worst day for Australians in the Great War. The Australian War Memorial describes the attack at Fromelles on the Western Front in France on 19th-20th July 1916 as “the worst 24 hours in Australia’s entire history”. In the context of the overwhelming numbers of losses, Fromelles was just another day at the Western Front, Allied casualties were 7,080, of which 5,533 were from the 5th Australian Division. Those who died lost their lives in an attempt to capture a few hundred yards of mud defended by German machine guns in concrete shelters. Oh! What a Lovely War captures but a fraction of the absurdity of the conflict.

Remembering ANZAC Day is perhaps one of the most appropriate ways of commemorating the Great War. Remembering a defeat, it focuses upon the men themselves, upon their spirit, their resilience, their heroism, and it reminds those who remember of the culpability of politicians whose arrogance and ambitions lie behind such conflicts. 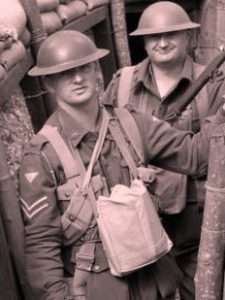