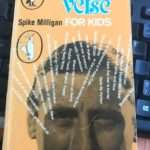 “This book is dedicated to my bank balance,” says the dedication at the front. At 20 pence a copy, Spike Milligan’s Silly Verse for Kids probably did not add much to his wealth. However, it did bring much enjoyment to the twelve year old who bought it.

In memory, it was bought through a school book club. Perhaps once a term, a catalogue would be circulated among pupils, really not much more than a four page leaflet. Children would choose the book they wanted to buy and bring the money to school and the order would then be placed by post.

Maybe the school gained some small commission on the sale, or perhaps the publishers gave the school a discount on its future orders of text books. How much did the author receive? Are royalties ten per cent of the cover price of the book? Spike Milligan would have smiled wryly at the thought of the piles of two pence pieces he would have accumulated through the sales of Silly Verse for Kids. To earn a pound would have required the sale of fifty copies. How much might the book have netted him? A few hundred pounds? And that would have been before the eighty-three pence in the pound income tax rate had taken back nearly all of what he had earned. The dedication of the book to his bank balance would have been entirely tongue in cheek.

Much more important than any small incremental increase in Spike Milligan’s bank balance was the fact that his poems gained him a place in the heart of many children who regarded poetry as something very dry and very remote from their lives. Of course, in literary terms the verse is doggerel not much better than that of William McGonagall, who was famous for having written the worst poetry in the English language, but Milligan’s writing is fun.

To the twelve year old boy who read the poems in the spring of 1973, Silly Verse for Kidswas a treasure of mischief and laughter. The copy that had long been lost has reappeared. Without turning a page, it is still possible to recall many of the lines.

In the foreword, Spike Milligan writes, “Most of these poems were written to amuse my children; some were written as the result of things they said in the house. No matter what you say, my kids think I’m brilliant.” 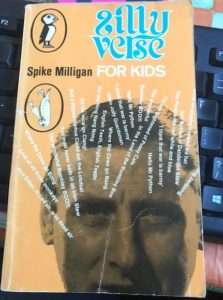