Tonight’s first results from the local government elections show that a viable alternative to the present government is as far away now as it has been since the Labour Party were defeated in 2010. The fortunes of the Labour Party could have been different

Growing up amongst those who had lived through the history of the Labour Party, there were tales of heroic figures.  My grandmother would talk of hearing Jimmy Maxton speaking at open air mass meetings.  Maxton was leader of the Independent Labour Party, a small group to the left of the main party.  There would be tales of Maxton’s mane of dark hair and Scots accent and the fiery oratory with which he captured the imagination of the crowds of working people who stood and listened. 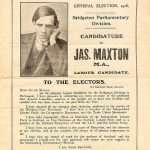 My grandmother died in January 1987.  Perhaps out of respect to her memory, perhaps out of a desire to investigate robust alternatives to the Thatcherite philosophy that dominated the England of the late 1980s, I bought a biography of Maxton the following year, a paperback edition that was on sale in Waterstone’s; its author was a young Scottish member of parliament, elected to parliament first in 1983, Gordon Brown.  He was elected to parliament as Doctor James Gordon Brown; his doctoral thesis was on the Labour movement in 1920s Scotland, in which the subject of his biography figured prominently.

Looking back at the days of Maxton and imagining the appalling conditions endured by working people in 1930s Glasgow, it is hard to imagine that Dr Brown was not profoundly affected by the matters of which he wrote.  Jimmy Maxton’s experiences were not theoretical, they were of a Clydeside of injustice and poverty.

If Dr Brown had remembered the tales of the struggles for dignity and fairness, he would have avoided the grubby politics of Tony Blair and stood for what he had believed, even if it meant unpopularity and marginalisation..

It used to be said in the days of Michael Foot that Dennis Thatcher, husband of a Prime Minister implacably opposed to anything for which Foot might have stood, regarded Michael Foot with warm regard as a writer and a scholar.  It was said that Dennis Thatcher could not understand how a bibliophile like Foot coped in the mundane, prosaic world of party politics.

Perhaps Dr James Gordon Brown was like Michael Foot, more at home among books than with politicians as unscrupulous as Blair. Perhaps there are still stories to inspire a striving for a new society. The next Labour government seems as remote a prospect as in the days of Maxton,