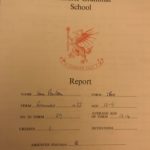 “Uncle Ian, you should go to bed, you look tired. You have all this week to do the work.”

”Thank you for being concerned. I have an essay of four thousand words to complete by Thursday.”

”How many words are in a sentence?”

”I don’t know. It depends. Maybe ten on average. Four thousand words would fill up eight sheets of A4 paper.” I picked up a sheet from beside my computer.

”Uncle Ian, if I were you, I would write two or three pages each day.”

”I think that is excellent advice. You are kind to be concerned.”

Reflecting on my report from my Year 7 days, 1972-73, my twelve year old nephew has considerably greater empathy and capacity for positivity than had some of my teachers at Elmhurst Grammar School, where I spent a year before it closed its doors for the last time in the summer of 1973.

It is not hard to recall what the teachers said because my mother unearthed my old school reports when tidying today.

The most comical comment of all came from the physical education teacher. Awarding a grade “C,” he wrote, “Ian has made some improvement in swimming.” I couldn’t swim; I didn’t learnt to swim until I was thirty-eight; how could I have made improvement?

There are three Cs and seven Bs on the report, something which I remember reading with a sense of injustice. In the end of year exams, I had done well in most subjects. I had come fourth in geography, fifth in science, sixth in maths and French and seventh in English, which I felt merited maybe at least one A minus. In history, I scored a dismal 33% in the exam, coming sixteenth, but still was awarded a B.

The comments on the report were probably the longest communication I received in the year from some of the teachers. “He has worked steadily and shows average ability,” was the comment from the art teacher. I suspect that similar words were used by him on many reports. “Average ability,” was an absurd exaggeration, my talent for art was worse than my ability for swimming.

Reading through the report now, the teachers whose names appear were not old. Some were in their twenties, some probably only retired in the last decade, yet belonged to a bygone era. A little empathy would have gone a long way: there were many pupils who would have left with happier memories. 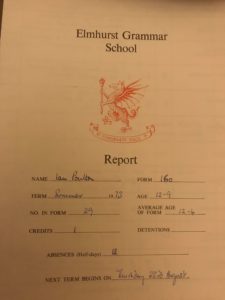