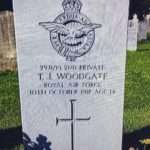 A school trip to Flanders next month will include a visit to Essex Farm Cemetery, just outside of Ypres. The cemetery must be amongst the most visited of sites on the Western Front. Beside it stands the memorial to John McCrae, the Canadian military doctor who wrote the poem “In Flanders’ Fields,” who tended to the wounded and the dying in the adjoining concrete bunkers that served as an Advanced Dressing Station.

Within the confines of the cemetery, some of the paths between the lines of gravestones become so worn that the grass is replaced with artificial turf. The reason for the wear is that many thousands of people wish to visit the grave of Private Valentine Strudwick, thought to be one of the youngest soldiers to die in the conflict. Private Strudwick has been fourteen years old when he had enlisted and fifteen years old when he had been killed in action.

In recent years, stories of other boys who died whilst on active service have emerged. In the city of Waterford in Ireland, there is a memorial to Private John Condon. In the National Maritime Museum of Ireland, among its material commemorating the RMS Leinster, there is a commemoration of Private TJ Woodgate, who was serving with the Royal Air Force at the time of the RMS Leinster was torpedoed.

Private Woodgate was recorded as being eighteen when he died. His gravestone at Grangegorman Military Cemetery in Dublin showed his age as eighteen. The records now show that he died at the age of just fourteen years and 10 months. On the Commonwealth War Graves Commission Website, his details are as follows:

Among the overwhelming tales of tragedy, the stories of Strudwick, Condon and Woodgate still have a poignancy. A hundred years ago, boys did not physically mature as young as they do now, these were boys, who would recognisably have been boys – and yet their tales of being the necessary age were accepted by recruiting officers.

On the wall of the church in the village of Authuille on the Somme, there is a memorial to the Glasgow Pals’ Battalions, including the 16th (Boys’ Brigade) Battalion, the inscription includes:

From trench and shell hole where death found them, their voices call – young, musical voices, the voices of boys still in their teens, the voices of martyrs on life’s threshold.

The voices of boys still in their teens. Perhaps there were many more such voices in the Great War. 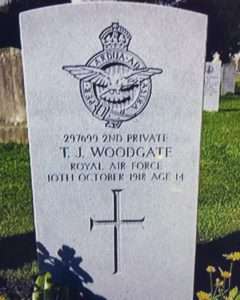