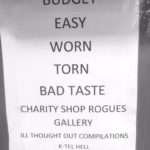 The labelling of the box of miscellaneous records in the Oxfam shop was not complimentary, an A4 sheet of paper stuck to the end of the box announced: budget, easy, worn, torn, bad taste, charity shop rogues’ gallery, ill thought out compilations, K-Tel hell, 99p was on yet another version of “Guantanamera,” etcetera, etcetera, etcetera.” The list was one that could easily have described the various LPs that I have bought through the years.

I remember buying budget records when I was fourteen. Do you remember the Top of the Pops records released by Pickwick? They were cover versions of songs in the charts, released every couple of months. The album covers were inspired by an attitude to women close to that of those responsible for Page 3 of The Sun newspaper. The recordings were not original, but neither then was the music played on BBC television’s Top of the Pops programme where groups were not allowed to play, instead the music was provided by The Top of the Pops Orchestra.

Easy listening didn’t generally appeal to teenage boys, so Henry Mantovani and Jim Reeves wouldn’t have been choices. However, with the passing years, the music of Bert Bacharach seems more and more attractive.

Worn albums I have would include a copy of Bruce Springsteen’s Born in the USA, which is scratched but seems too important to throw away. “Torn” could apply to any number of the paper sleeves of 7 inch singles; album covers are more enduring.

“Bad taste” seems an entirely subjective category – I would regard rap as bad taste, and much of Country and Western even worse taste, but the massive success of both genres shows how much I know.

“Charity shop rogues’ gallery” presumably refers to records that frequently appear, presumably having achieved such popularity when they were released that their current supply remains plentiful.”

Ill thought out compilations” is an interesting concept. Compilation albums seem to be greatest hits collections or songs released by a cluster of similar bands. Do the Greatest Hits of Fleetwood Mac or The Mamas and the Papas count as such compilations? Or do they pass the quality standard?

However, what stung the most was the reference to “K-Tel Hell”. With money received for my sixteenth birthday in October 1976, I bought two albums at £2.99 each. One of the albums was a collection of songs by The Beach Boys. The other album was called Soul Motion, it was my favourite record with its two sides of classic songs by soul artists – it was released by K-Tel. To fail to recognize the excellence of this record just shows just how lacking in good taste is Oxfam. 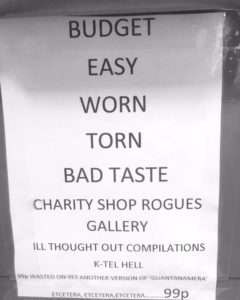