It is the anniversary of General de Gaulle’s appeal to the French people from London on 18th June 1940, an appeal that seems to be commemorated in almost every community in France. De Gaulle’s speech that day, on the English-speaking BBC, was only actually heard by a minority of French people, his broadcast on the BBC four days later on 22nd June would attract a larger number of listeners, but it is the speech of 18th June that is seen as one of the most important in French history, the one that is seen as the starting point of the French Resistance to the Nazi occupation of their country.

De Gaulle’s achievement was extraordinary. He was a brigadier general who had become a junior minister in the government, but he projected himself as the French leader. His “London Poster”, calling on French exiles in the city to join him, was to appear in France and in Francophone countries. It became an icon of French spirit and reproductions of it are still to be found in towns and villages across France. The response to de Gaulle was hardly overwhelming, a few hundred exiles joined his Free French Army, supplemented by a number of soldiers, (estimated between 3,000 and 7,000, according to which source one reads), from the French army who had been evacuated at Dunkirk, (the majority of the 123,000 French troops evacuated returned to France to try to continue the struggle against the invasion in the south and the west of the country).

The details of the events of the summer of 1940 have become no more than details. Commemorations in France today will remember beginning of the process that led to the liberation in 1944. Despite all the conflicts within France at the time, despite the formation of the collaborationist government at Vichy, and the later execution of the Vichy leaders, France managed to create a narrative of history that unified its people.

Certainly, even at a distance of more than three quarters of a century, there will be people whose family memories will have moments of bitterness and division. The summary execution in 1945 of as many as ten thousand of those accused of being collaborators with the Nazis will be matters of contention for generations to come. There will still be stories of distrust; but the overwhelming story is one of a united and free people.

General de Gaulle may have had many faults, but he did know how to create a popular history. His skills at uniting people would be of use in Europe today. 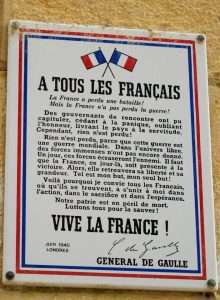