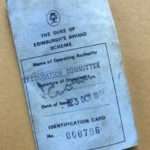 Among records not played since the 1970s, there was my Duke of Edinburgh Award Scheme identification card. It is signed by Ernie Light, the PE teacher with mercurial moods.

Life with Mr Light could be dangerous at times.

Mr Light taught science and P.E. and was our school organizer for the Duke of Edinburgh award scheme, all of which carried with them a degree of physical threat.

Science should have been the safest of the three activities he oversaw, had it not been for his propensity to occasionally throw whatever came to hand at inattentive pupils. His explanation of the components of granite will remain forever in the memory. Holding in his hand a sizeable chunk of rock, in order that it be visible to the whole class, he was pointing out to us the signs of quartz or feldspar when without warning the rock left his hand and flew across the room. It ricocheted off the desk behind before crashing into the notice board on the back wall and falling to the floor. A sizeable chunk of the surface of the formica topped desk seemed to have gone with the rock. Tony, the boy behind who had been talking, was momentarily struck dumb.

P.E. was benign most of the time, the exercise regime outside each morning, the Wednesday morning routine in the gym, but once a fortnight, on a Saturday morning, the sort of delicacy demonstrated in his hurling of rocks, was manifest in his organizing of the cross country runs. These weren’t the sort of soft stuff one sees now on athletics coverage on television, these were gruelling routes. One route started at around a thousand feet above sea level, dropped sharply three hundred feet into a thickly wooded valley before rearing up to fifteen hundred feet where there was a footpath along the top of a very windswept ridge. Mr Light would sit in his blue Datsun in his sheepskin coat and scan the ridge with binoculars to count the runners, never seeing any hypocrisy in sitting in comfort while encouraging others to exercise.

It was the Duke of Edinburgh award scheme which could throw up unexpected surprises – most boys only did it because of the opportunities to go hiking. The bronze award expedition itself was only a fifteen mile hike with an overnight in open country, but Mr Light felt this meant two or three one day practices.

The first resulted in a route that was six miles more than planned when Mr Light broke from using compass directions and instructed a turn to the left when a bridlepath met a road. He should have said a turn to the west, descending in a southerly direction onto the road, a turn to the left was a turn east – three miles later the mistake was realized.

The second brought a near escape from being savaged by dogs set on us by an elderly bachelor farmer. Skirting the farm on a public footpath and beginning to climb away from the run down farmhouse, a figure appeared at the back door and began waving a stick. A pair of black and white dogs streaked up the hill. Realising the farmer meant business prompted a burst of speed uphill as the yapping dogs grew closer, suddenly a large pig appeared and ran at the dogs, the dogs turned and ran back down the hill tails between their legs. There was much breathless laughter and a noting that when one is being pursued by angry dogs, it is helpful to have a pig on hand.

The expedition itself included a route planned by boys themselves, ostensibly to visit archaeological remains, which are plentiful on Dartmoor, and a night spent camping in wild country. On the boys’ part, the chief criterion for the route was that it allowed the possibility of pitching the tent within a mile of the Warren House Inn, to which the tallest boy would be dispatched and return with bottles of cider. The chief danger on the expedition arose the morning after the night’s camping when Mr Light asked where were the baked bean tins from the previous night’s meal. One of our group had decided the simplest means of disposal was to throw them into a clump of gorse. He was made to crawl in to recover them.

Mr Light’s signature on the battered card betrays little sign of the man he was. 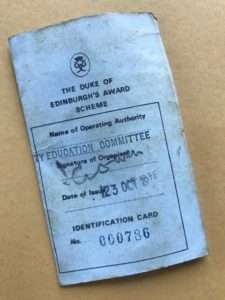