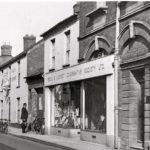 An online photograph from Langport’s Bow Street recalls the presence of the Co-op in the town. Notes with the picture suggest that the shop was demolished in the late-1960s or early-1970s, to make way for a new housing development that was built behind the street.

Co-op shops were a feature of every town and were even to be found among village shops, my grandmother’s weekly grocery order came through a phone call to the Co-op in the village of Long Sutton. The television advertising jingles for the Co-op still linger in the memory, “It’s all at the Co-op – now” and “Your caring sharing Co-op.”

The presence of the Co-op has declined since those days. The nearest Co-op to Langport now is at least a dozen miles away and there would seem little possibility of it re-establishing itself. The retail scene is dominated by massive players, Tesco, Sainsbury’s, Morrison’s, Asda, Lidl and Aldi, Waitrose.

The Co-operative ethos has remained one of trying to pursue ethical values, to trade in a different way, to share its trading surpluses with all who have signed up as members of the Co-operative and with the local community. To hold onto market share in an aggressive market is difficult; people are far more sensitive to prices than they are to ideas such as fair trade or the responsible use of resources. To uphold co-operative values against retail opponents who are prepare to resort to predatory pricing to build up their market share is an uphill battle. It is hard to imagine the Co-op ever managing to compete with Tesco.

Perhaps the Co-op could make more of its tradition, draw more upon its roots for inspiration, appeal to a new generation by not being the Co-op, but really being a co-operative.

The Green and the environmental movements, that draw much of their support from younger people, would share values that would have motivated many of the Co-operative movement’s founders. The Left who constitute much of the half a million members of the Labour Party would believe that co-operatives would play a major part in their vision of a post-capitalist society.

If there are so many hundreds of thousands of people who aspire to the creation of a different way of doing things, if there is a generation committed to concepts such as sustainability and sharing, then the Co-operative ideal from the past would seem to have a real future. Perhaps there will be one in Langport again. 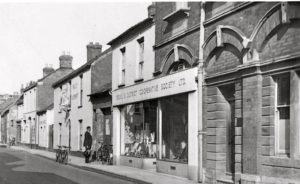