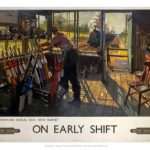 Passing over the level crossing, a green light illuminates the signal box. The face of the signalman is visible, intently focusing upon his work. I never ever wanted to be a train driver, but being a signalman would seem to have been a delightful job to have had. There is an extraordinary beauty and craftsmanship and order in a box.

Twice, I have had opportunities to stand in signal boxes, both in Co Tipperary, one in Clonmel and one in Roscrea. They seemed places apart, everything perfectly painted and polished. On each line, there were only two up trains and two down trains each day. On the Roscrea line the level crossing gates are manually opened and closed, the train rolls along at no more than twenty-thirty miles per hour, no speeding expresses, yet there seems a sense of sharing in something beyond oneself, being part of a great operation. If that is the case on an Irish branch line, then how must it feel in a box where Great Western locomotives bound for London Paddington haul their carriages past the box?

One of my favourite pieces of railway art is a poster called “On Early Shift” (Greenwood Signal Box, New Barnet), by Terence Cuneo. It is the picture of a man operating a lever in a railway signal box. In the domestic detail of the picture, there is a sense of security. The plain kitchen chair, the tin bucket, the watering can, things from the ordinary homes of ordinary people. A milk can is sitting on the floor beside the watering can, its presence is evocative of mugs of strong tea with two spoons of sugar. The man’s back is turned, but once the signal is changed, one knows that he will turn with a smile and cheerful words, that he will have carried out the routine many thousands of times and not once will he have been mistaken.

The composition of the picture is not a matter of chance, there is an intention to convey a particular sense of railways to those who might see it. It spoke of a world that seemed safe and ordered, a world where a railway timetable symbolized a sense of purpose and direction, a world well regulated.

Signal boxes remain resonant of such a world, the man whose face was lit with the pale lights of the box would have known how to work the levers in Cuneo’s box, for his line still has semaphore signals. His signal box preserves the beauty and certainty of Cuneo’s painting. 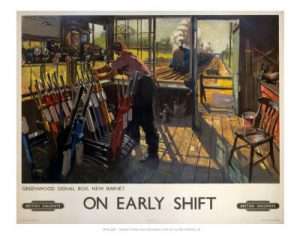