Wise counsel always prompted scepticism about the relationship between the sighting of a single swallow and the weather that might follow. Human behaviour seems more often a reliable indicator of what approaches than creatures of the natural world, who have neither calendar nor the advantage of satellite images.

The disordering of nature has meant familiar mileposts no longer tell accurately the distance to or from the respective solstices; autumn still now lingers, weeks after winter had arrived last year; leaves still clinging to trees, flowers continuing to bloom. Reflecting the precarious relationship between the elements and those who work the land, a flock of sheep was brought up from Sedgemoor to graze grass that was being kept for later in the winter.

When living in Dublin, the arrival of the middle months of the year might once have easily have been discerned by the sighting of yellow number plates in the evening. The road was part of the route from the car ferry to the motorway: on spring and summer evenings British visitors would pass along the road, beatific in their expressions as they contemplated the holiday that lay before them, their presence a more reliable indicator of the season our calendar pictures suggested it might be, than a whole flock of swallows.

Most human endeavour may not be on more than a nodding acquaintance with the seasons, but there are some things which remain dependent on the time of year. November signs appeared in the garden centres advertising bareroot shrubs, hedging plants and trees, the late autumn being an opportune moment for planting. Regulations on the release of nitrates require that, from July to November, within six weeks of land being ploughed, there must be the emergence of green cover from a sown crop. Fields of winter barley are now well established, plants sturdy enough to withstand the onslaught of winter.

Some things are fixed in time: whatever the apparent or actual season, mild, grey and damp, or cold, blue and icy, Advent began on the fourth Sunday before Christmas and concludes on Christmas Eve. The supermarkets may have been filled with Yuletide stock for weeks, shop windows may have festive dressing, the lights may be long lit, but Advent lingers in the churches, fulfilling its days: penitential purple, wreaths of candles.

In the midst of the infinite changeability of the world, in the midst of an environment in which chaos theory governs weather patterns, some seasons are fixed, unchanging, as immutable as the story they tell. 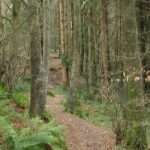