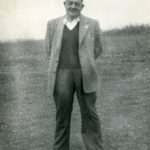 My grandfather suffered persecution at the hands of Oswald Mosley’s Blackshirts, I grew up with stories of him being pursued through streets in London by members of the British Union of Fascists. No-one ever explained why he should have been the object of their aggression.

Papa was born at Isleworth Infirmary, Middlesex on 2nd November 1906 to Ellen Poulton, a machinist from Chiswick, he seems to immediately disappear from view. No father’s name appears on the birth certificate and the infirmary, which was part of Brentford Workhouse, is given as Ellen’s address.

Papa is invisible in the 1911 Census. He must be somewhere in the 1911 Census, but it seems not under his own name. He would have been four at the time of the census in April 1911 and a four year old cannot just disappear, yet he is not to be found. Each and every Sidney Poulton recorded is different from the facts we know of him.

The family story was always that Papa grew up with a foster family. A photograph of him as a young man shows him sitting in a drawing room chair, dressed in a suit and a winged collar with a glass of sherry in his hand – a far remove from the workhouse – but no-one knows where the photograph was taken.

Who were the foster family? Did he grow up with his natural father? What was his father’s name? His mother Ellen had a daughter and another son, but had he half-brothers and sisters who were the children of his father?

All through the search for the family tree, the question remained as to why he had suffered persecution. Perhaps it was simply his appearance. Prejudice is never rational, perhaps there was no reason.

Sitting with my mother after my father had died, my mother said, “You know Papa had a Jewish skull cap?”

It was the first time in my life that I had heard it. Why had he a yarmulke?

Ellen, his mother had been Church of England (insofar as she was anything, she died in a workhouse in 1912 and was buried in an unmarked grave in Brookwood Cemetery). So, if Papa had worn a yarmulke, had his father been Jewish? Had the foster family with which he had lived been a Jewish family?

So late in the day, it seems impossible that the full story will ever emerge. Perhaps DNA might establish a connection with a whole new family. Why could no-one have said before?