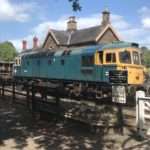 Is there any nation in the world quite as fascinated by railways? Much of the fascination is not with railways that operate Twenty-First Century rolling stock as part of the national rail network, but with railways which were closed more than fifty years ago. These are the lines where volunteers run trains on lengths of track which may sometimes be miles from the nearest line of the network. Stations which may have been used by a handful of passengers in British Rail days may now attract hundreds of visitors at weekends and holidays.

It has been noticeable that diesel locomotives now feature among the engines. Diesels were once despised by steam railway enthusiasts, they are the villains in the Thomas the Tank Engine series of books by the Rev. W. Awdry. Perhaps it is a practical decision, the boilers of steam locomotives require regular inspection and expensive maintenance; perhaps it is an economic necessity, railways run on a shoestring are able to more readily run diesel engines.

If blue and yellow former British Rail diesel locomotives are evocative of the past for people in 2020, then what is there in 2020 that will become objects of nostalgia in fifty years’ time? In 2070, what will people preserve and restore as symbols of the past?

Perhaps there will still be railways, perhaps the sleek dark green locomotives of the present Great Western Railway will have found homes for retirement on preserved lines where the use of a carbon fuel will still be tolerated. But what else will there be?

Visit antiques centres, and much of the stock is the everyday of former times. Growing up on a farm where my grandfather milked a herd of twenty cows, the churns and the buckets were so commonplace as to be unworthy of comment, yet such items are now to be found on sale as antiques. Kitchenware, furnishings, clothing, garden tools, machinery – there seem to be few things that will not find a buyer. Even tins for biscuits, sweets and cleaning compounds will now be found for sale.

If the everyday of fifty years ago has become the nostalgia of today, then how much of today’s everyday will appear in antiques shops? Will there be microwave ovens and Flymo mowers and Dyson vacuum cleaners and desktop computers and iPhones and countless other consumable durables from 2020? What that we have will be worthy of nostalgia? 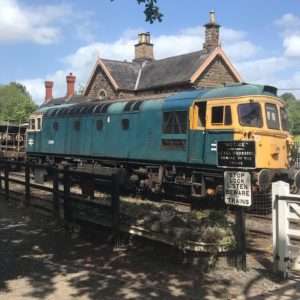