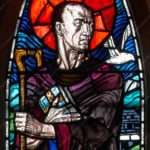 Columba is said to have died on 9th June 597, 1,423 years ago today, if one believes the traditions.

At one time, I felt a certain proprietorial sense towards the Derryman. In March 1989, I walked 110 miles in five days to travel from Gartan in Co Donegal to Movilla in Co Down, where a local tradition alleged he had studied under Finian. Being honest, there was not much sense of a saintly presence along the way, more a sense of sore feet and aching knees.

Spending time as Rector of Larne in Co Antrim from 1996 to 1999, I was always struck by the stained glass depiction of Columba by Wilhelmina Geddes. He appeared as a tough, sinewy, muscular figure, one for whom the crossing from Ulster to the Scotland in a currach would have been a credible possibility.

Columba always seemed human. His row with Finian had led to bloodshed and in disgrace he had left Ireland to go into exile on a remote Scottish island. It was his ability to rebuild his life that seemed impressive; his capacity to make something out of nothing.

Sadly, the whole history of Columba was rewritten centuries ago. The strong man of Geddes’ imagination had been turned into a plaster saint as long ago as 1532, in which year Manus O’Donnell’s life of Columba described the departure from Ireland thus:

Then steered they the boat through Loch Foyle to the place where the lake entereth into the great sea, that is called the Tonna Cenarma today. And it was not the folk only of his land that were heavy and sorrowful after Columcille, but the birds and the senseless creatures were sorrowful after him. And in token of this thing, the seagulls and the birds of Loch Foyle were pursuing on both sides of the boat, screaming and screeching for grief that Columcille was leaving Erin. And he understood that they were uttering speech of sorrow as he would understand it from human folk; and so great was his gentleness and his love for his land and the place of his birth that no greater was his sorrow in parting from her human folk than his sorrow in parting from the seagulls and the birds of Loch Foyle. So that he made this quatrain:

“The seagulls of Loch Foyle,
They are before me and in my wake;
In my coracle with me they come not ;
Alas, it is sad, our parting.”

Understanding animals? Gentleness? This is Columba, not Dr Dolittle. The medieval writers replace the man with a caricature and the church continues that tradition. 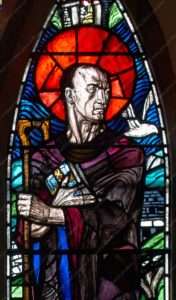