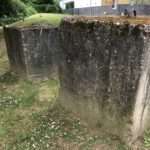 Two huge blocks of reinforced concrete sit beside the road. Weathered with age, covered with lichens, mosses and grass, and showing traces of rust on bars of metal that run through them, they are clearly of some vintage. Perhaps their location provides a clue as to their purpose? They stand beside a pillar of a railway viaduct and were presumably placed there as part of the defences during the Second World War, intended to block the way to a vehicle seeking to pass beneath the viaduct.

VE Day is now more than seventy-five years ago and the number of people who might remember the guarding of the viaduct is no more than a handful.

The blocks revived memories of my grandfather’s stories from days in the Home Guard. As a farmer in Somerset, he belonged to a reserved occupation, being expected to serve on the home front to produce as much food as possible. On top of the farm work, he was expected to work for the local council, repairing the roads, many of the regular road workers having been called up for military service. At night, he served with the local platoon of the Home Guard, which was an activity that produced a fund of stories that he would recount. Few of his memories which would have inspired confidence in the capacity of the motley group of volunteers to withstand the heavily armed invasion forces.

Guarding the railway tunnel at Somerton one night, there was the sound of someone moving in the darkness. The orders, he said, were to shout, “halt, who goes there?” and then to shout, “stop, or I fire.” If the person did not obey the order, then they must open fire. The orders had been given and the shadowy figure continued to come towards them. Instead of firing, they decided to step forward to investigate who the person was. They discovered not a saboteur, but a local man, returning from a pub, very the worse for wear. “We could have killed him.” It wasn’t hard to imagine Sergeant Wilson from Dad’s Army saying that he had warned how dangerous it was to shoot at people.

If there was a lack of ruthlessness in the face of a potential threat to a significant railway line, there was a doubt as to the efficacy of anti-tank measures, which included placing burning tar barrels in the road in order to try to stop oncoming panzers. If tar barrels were the alternative, the concrete blocks seem a veritable piece of fortification. 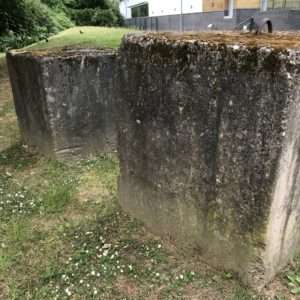