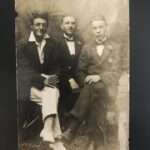 The postcard has a picture of three young men, its edge seems mouse nibbled. On the reverse is written, “A photo of Mr S. Poulton, Mr E. Sayell, Mr A. Crook given to Miss E.E. Punshon, 18-4-25.” Mr S. Poulton is my grandfather, in April 1925 he would have been eighteen years old. The story behind the postcard is a mystery.

Among the family photographs, there are two more postcards with him similarly dressed, white tennis shirt, white flannels, white tennis shoes, and a dark blazer. On one card, in addition to the tennis outfit, he wears a Homburg hat. Underneath his picture he has written “Yours truly, S.H. Poulton.” The reverse is similarly inscribed, “Given to Miss E.E. Punshon by Mr S. Poulton.” Were we able to discover the background of E.E. Punshon, or to know more about E. Sayell or A. Crook, we might be able to fill in the missing pieces of my grandfather’s story.

The documentary record of his life shows that he was born in the workhouse infirmary at Isleworth in 1906. His mother, Ellen, was again in the workhouse at the time of the 1911 Census, from which his name is entirely absent.

The next appearance of his name on a public record is in the 1928 electoral register when is living with a couple called Charles and Irene Green at Holly Road, Chiswick, an address very different from the place in which he was born. What happened to him in the missing years?

He had siblings, or perhaps half-siblings, for Ellen never entered a father’s name on birth certificates. His brother was sent to Hampshire, being educated in a vocational school before commencing an apprenticeship back in London.

My grandfather’s upbringing seems to have been with a middle class family, but there is no trace of who that family might have been. The years after the Great War were times of severe austerity. Eighteen year old boys with sufficient spare cash to fund studio photographs and the printing of postcards cannot have been that plentiful.

If, as it seems from my grandfather’s ownership of a kippah, the traditional Jewish skull cap, he was raised in the Jewish faith, then was he with his father’s family? If he was with his father, then who was his father? What might our family name have been?

The three names on the postcard, Sayell, Crook and Punshon are not the most common of surnames. Perhaps there is someone out there who can tell me the story behind this photograph? If you can throw any light at all upon the photograph, please email me: ian@forthefainthearted.com 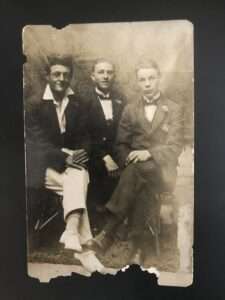