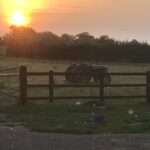 Walking through Low Ham, there was a blue Fordson Major sitting in a field. Its location suggested it was still a working tractor. Tractors that only tour the vintage fairs tend to be kept tucked in safe corners, not parked in fields in thirty degree heat.

My grandfather had a blue Fordson Major, for years it played its part in the gentle rhythm of a small farm.

Mt grandfather’s farm was one where each of his twenty cows came into the same place in the stalls each milking time. There was an electric milking machine, so hand milking was not necessary, but the buckets to which the milking clusters were attached were still emptied into churns and the churns were still collected by a lorry from the Milk Marketing Board each morning.

My grandfather, with his blue Fordson Major and his grey Ferguson, could not have imagined the developments that would take place in farming, he would have imagined farming as always something requiring plenty of hands. He would certainly not have imagined the sort of robotic farming that has become established, farming where hundreds of cows can be milked by a handful of robots and a couple of workmen.

Two centuries ago, the protests of the “Captain Swing” movement in southern and eastern England were directed against the mechanization of farming, against threshing machines which threatened to deprive farm labourers of much of their winter work. Two centuries later, the suggestion that anyone should protest at the progress of technology would be though absurd.

Now, anyone who might question the inexorable process of the replacement of human labour with machines risks being labelled a “Luddite.” The Luddites took their name from a folkloric Eighteenth Century protester, Ned Ludd who was said to have smashed knitting frames. A Luddite was someone who protested at the weaving jobs of skilled artisans being lost to low-skilled, low-waged labourers operating mechanized looms.

The Luddites were protesting against the injustice they felt was being imposed upon them, but they were powerless in the face of government power and the widespread introduction of the new technology. Industrialization in England was to create an economic chasm between those with access to wealth, resources and technology and those whose physical labour was their only resource.

Technology has changed every occupation, initially supplanting the jobs of manual workers and then those of artisans, it now threatens the professions. Accountants are being replaced by computer packages, solicitors once valued for knowledge of the law are being superseded by the capacity to search electronically vast numbers of documents, even journalists are now threatened. No-one seems entirely safe, even medicine is increasingly a matter of technology rather than personal expertise.

Ned Ludd might have wondered how things came to be as they are, was there not a moment when someone might have called “stop”?

Perhaps the blue Fordson Major was a step towards the redundancy of all humans. 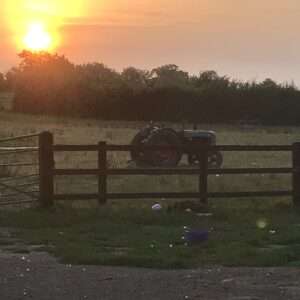